An In-Depth Breakdown of the New Bachelor Contestants' Shoe Choices

There are plenty of ways to judge the new lady contestants on the Bachelor: Breast size, vagina size, a new formula I've come up with that compares the size of a woman's breasts to how deep their vaginas go. Unfortunately, ABC does not provide their viewing audience with such detailed analytics -- so instead we are forced to rely on simple full bod shots in order to form our first impressions.

Soooooo, seeing as my blog is already blocked on my friend Dave's work computer server, I figured why not perv it up a bit and write a blog post about a subject/fetish that my therapist says is "somewhat healthy and probably fine." 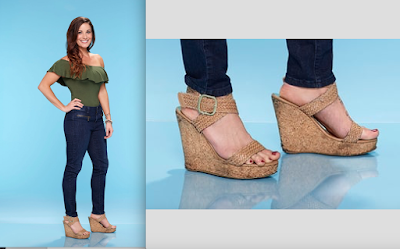 Elizabeth is rockin' the classic Corkboard Chunk-o-Rama ($69, Evan Picone), easily the worst shoe anyone has ever worn in the history of life. The wedge heel looks like a goddamn wooden roller coaster -- and the wicker straps (are those wicker? I think they're wicker) is sure to cause deep, deep skin abrasions. This woman should be ASHAMED of herself. I expect her to make it to hometowns. 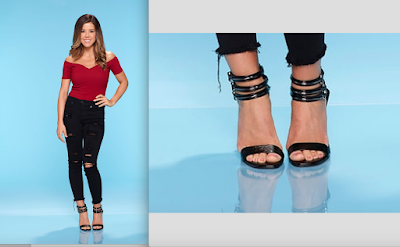 Christen, Christen, Christen. Forget about the jelly roll snap bracelets that are wrapped around the top of your ankles, why is there a loose piece of string dangling off the bottom of your right pant leg? I know this post is supposed to be about footwear, but c'mon Christen, you're on a nationally televised prostitution game show! Clearly when you went on this photo shoot you had to be aware that grown men all over the internet would be magnifying pictures of your feet and writing about it on their (one-time very popular to mildly popular) blogs. Also, what is up with the slalom ski stance that she's posing in? 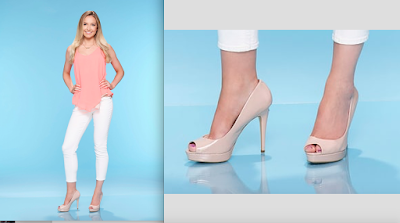 I'm really doing this, huh? I'm really writing an entire post where I just talk about the new Bachelor contestants' footwear? Okay, well, these seem like a decent pair of standard beige pumps, the same color as literally every room in my mother's home, but what's with the platform sole? That just SCREAMS low class. And yeah, I get it, it makes it easier to walk in, but I've never met a woman who snagged herself a man because she could walk. I've also never met a live, non-mouth-breathing woman. 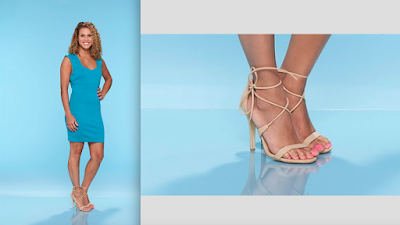 The stringy tie thingies are perfect for wrapping around a man's throat, and the pointy heels could dig into your jugular at just the right angle. This woman clearly knows how to have sex with a man on national television the night before a different woman has sex with the same man (just in a slightly different hotel suite). Haircut's a little too Jewy though. 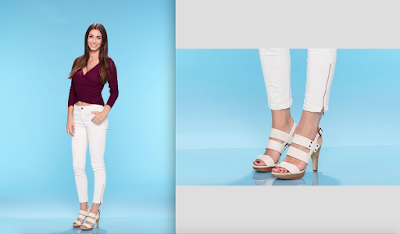 Ugh, Astrid's rockin' the Pottery Barn special. These shoes look like they were meant to be displayed on some dumb coffee table right next to a bowl of fake apples and flimsy wicker balls. It's a shame because her innie belly button is ON POINT. Unfortunately this is not a blog post about belly buttons this is a blog post about hold up this woman's name is Astrid?! 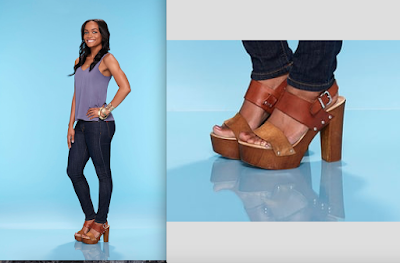 Pretty sure Rachel had these shoes made by her local cobbler. Ugh, they're horrible. Just horrible. I've also never heard of a black woman named Rachel. Rachel Cobbleberg. 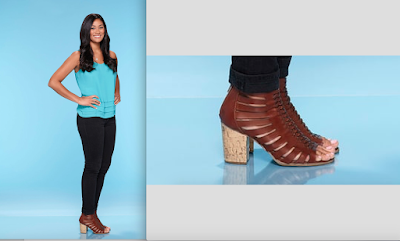 Who knew that Spalding was throwing their hat into the shoe game? If she rotated her shoe a mere 45 degrees to the left you'd see Roger Goodell's signature on the other side. And what's with the cork board heel?! I wanna thumbtack my phone number on there and offer up some SAT prep tutoring. This might be Sacajawea's signature shoe. 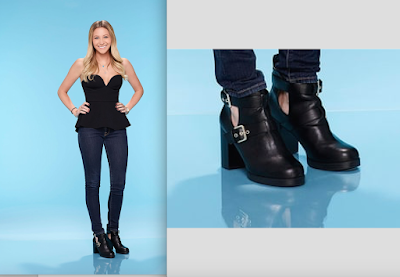 Apparently Lacey just finished up touring with Soundgarden. Yeesh. Although I do sort of like that little peek-a-boo ankle. And the buckles are kinda hot too. Don't these women get blisters? I might be gay. 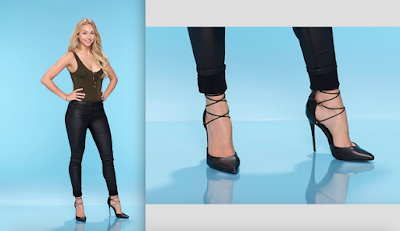 Here is a woman who knows how to perform a colonoscopy. I love everything about Corrinne's shoes: the pointy toe, the spikey heel, the Ukee Washington wrap-a-round straps. Doesn't hurt that her pants are tighter than Fort Knox. This lady is BOUT DAT LYFE. I'm not sure which life that is, I have never actually had a conversation with the kind of woman who'd wear these type of shoes, but I would pay top dollar (probably six bucks) to watch Corrinne smash a watermelon between her thighs. 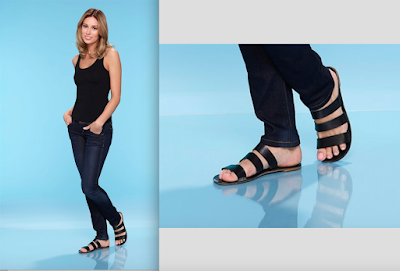 Well, there's not much Halley can do with those size 14 floppers is there? But I appreciate the simple three-strap leather sandal (also $69 from Evan Piccone). Her feet kind of look like platypuses though, right? Either way, this is a woman who can go to a casual gastro pub by day and frog kick her way across the Pacific Ocean at night. #Respect 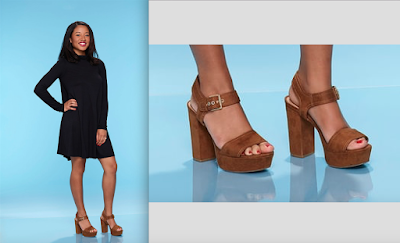 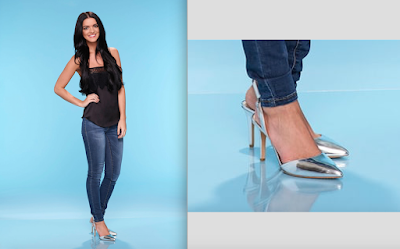 Raven will be starring in the upcoming Marvel movie, "Silver Nips," where she attempts to fight off bloggers who smell her hair whenever they walk past her on the street. That being said, I don't hate Raven's silverados. Also, for the record, there's a guy at work who I'm friends with and our entire relationship is based around talking about Marvel movies except that I have yet to tell him that I have never once seen a Marvel movie. 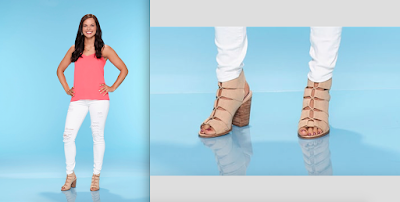 THERE SURE ARE A LOT OF WOMEN ON THIS SHOW, HUH?

Ugh, Briana's shoes are disgusting (and her pants don't even fit!). 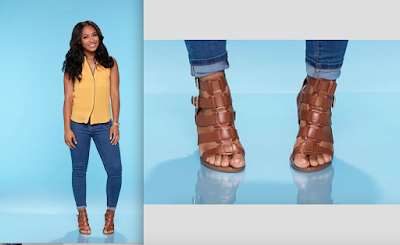 This is an insult to Dominique Wilkins. What is even going on here?! 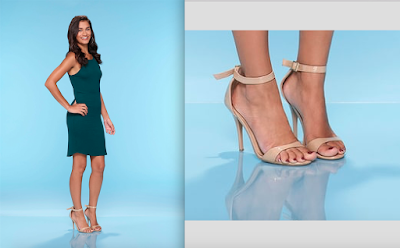 I feel like Taylor should be holding a clutch here. With chap stick and lip stick and her ID and credit card and AAA card that expired three years ago but still works because she's hot as fuck and can bat her eyelashes and get anything she wants. How did Hillary Clinton lose the presidency? How do women not run everything? We are seriously the stupidest species on the planet. Her feet look so soft by the way (you can't deny it!). 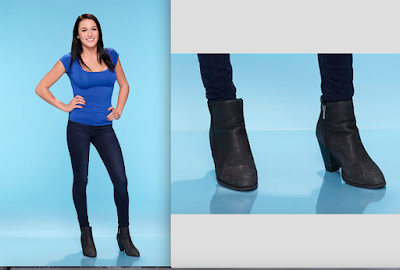 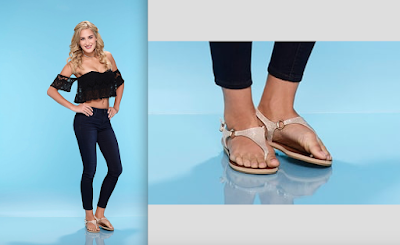 While I appreciate the high arching left foot, it's hard not to focus on her enormous, enormous, enormous breasts (and exposed midriff). I can't believe I went this long not talking about chicks' breasts. The rest of the post will be used to do just that. 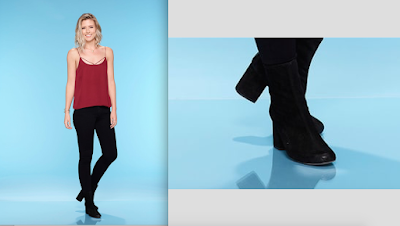