The Bach: Oh We Back on That Again


Before we discuss the fact that a woman brought a horse into a house, we need to talk about the ridiculous outdoor furniture that they have at the Bachelor mansion.

I mean, couches? They have outdoor couches? I didn't even know they made outdoor couches -- with like, cushions and shit. Is it normal for a homeowner in Southern California to keep couches OUT-SIDE of their home? Because that's just preposterous on sooooo many levels.

Here in Philly, my outdoor furniture consists of two mildew-stained camping chairs that swallow you whole the second you sit down -- and a disgusting orange milk crate. And you know what? It's perfect! Because spending time outside is stupid. Between the freezing cold winters, mosquito-filled summers and my shithead 8-year-old neighbor Brendan, I can't remember the last time I spent more than seven straight minutes outside. The other day I was raking leaves and Brendan came up to me and was like "GIMME FIVE, ELVAN" and I was like, "You have so much cream cheese in your braces how do you have that much cream cheese in there," and he was like "Too slow!" and I was like "I didn't even try to slap your hand" and he was like "Your beard looks like shit!" and I was like "IT'S IN THE IN BETWEEN STAGE."

Ugh, no one likes that kid. Not my wife. Not the girls who live next door. Not even his own stepmother. I know this because when Brendan and his family moved in a few months ago she introduced herself to me as his "stepmother" which is code for "I need you to understand that this kid is NOT my biological son and I HATE him." Anyway, fuck Brendan, fuck being outside and wow I sure am taking advantage of being able to curse on my own blog as opposed to all that clean shit I gotta write for those prudes over at The 700 Levvy, aren't I?

But enough about me and my diarrhea-filled mouth, I guess we have to talk about the actual show, don't we?

The most amazing thing about that lady bringing a horse into a house was not that she brought a horse into a house, it was the fact that she was worried that the horse might barf all over the carpets. Ummmm, lady, clearly there's no carpeting inside the Bachelor mansion. It's hardwood and stone tile only! No wonder she got sent home the first night. Also her name was Maegan!

As far as the other chicks: we've seen it all before, Lace. You're not that special. (Although that whole "Look at me. Look at me. I'm the captain now" shit was straight bonks.) The local news anchor? Whatevs. Super hot chick bores nation to sleep! More at 11! Even though you'll be asleep by 9:30!
And then there's the Bach himself. Besides the fact that he's a white person, Ben does seem to have some likable qualities. He played football and basketball in high school, has a decent sense of humes and his teeth really did look in tip top shape. Although to tell you the truth, he seems a litttttttttttttttle too attached to his parents, which in my book (which is not real, because I have literally never read or owned a book) is a red flag. I mean, if a guy can talk to his mother on the phone without mouthing the words "fuck you" over and over again as she's talking, something's seriously wrong with him.

I mean, look, Ben means well, but he's got a few things to learn if he wants to become a bonafide Bach extraordinaire. There are some basic ground rules that all Bach'es should follow: keep the ripping sluts around, get rid of the total snoozes and never waste your time with a disgusting virgin.

For examp, any chick who falls into any one of these three categories needs to be sent home IMMEDIATELY if not sooner.

- Any woman who refers to somewhere as her "happy place" (just like Lauren did, talking about the beach). I once went out to dinner with a chick who told me that Martha's Vineyard was her "soul space." The date lasted around 16 more seconds and 15 of those seconds were just me screaming at the top of my lungs.

- Any woman who works as a Software Sales Rep (like Caila, the lady from Boston with the absolutely horrible kitten heeled shoes WITH THE STRAPS?!). I mean, how boring of a person do you have to be to go into software sales? What is software sales? Ugh, I don't even care. Those shoes.

- Any woman who says her kids are the "most amazing kids" (like Amanda, the very sexy mother of two who is "ready to start dating again" on a nationally televised game show. It's not that her kids aren't amazing. Maybe they are. But most likely they're just normal stupid kids who only eat chicken fings. The "most amazing kids" are the ones who can breakdance and/or fart all over other kids' faces. 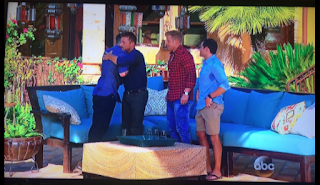 On the other hand, if a woman checks any of these boxes, marry her as soon as possible.

- A black chick (especially if she knows how to shoot a gun, like Jubilee, the hottest chick who has ever been on this show and that is a #FACT).

- A redhead (especially one who refers to herself as Red Velvs despite having low self esteem and VERY milky skin).

- A foreign person (like Shushanna, who is DEFINITELY into hardcore choking/spitting/spelunking).

- Literally any woman with a working vagina.

Unfortunately, Ben failed miserably on his first night, keeping the virgj and sending the milk of magnesia home.

What a lucky, lucky dude.


Well, there you have it, the Bach -- and TVMWMWMMMWWMWMW -- is back. Ugh, I wonder how long this will last. Next Monday is the College Football National Championship Game, so maybe I'll watch that instead? Ugh, who am I kidding? We both know I have zero control over my remote control. See you next week.

Email ThisBlogThis!Share to TwitterShare to FacebookShare to Pinterest
Labels: The Bachelor: Ben Higgs