MAJOR FUCKING ANNOUNCEMENT: Zoo With Roy and I are doing play-by-play of the Ursinus-Rosemont basketball game this Saturday! 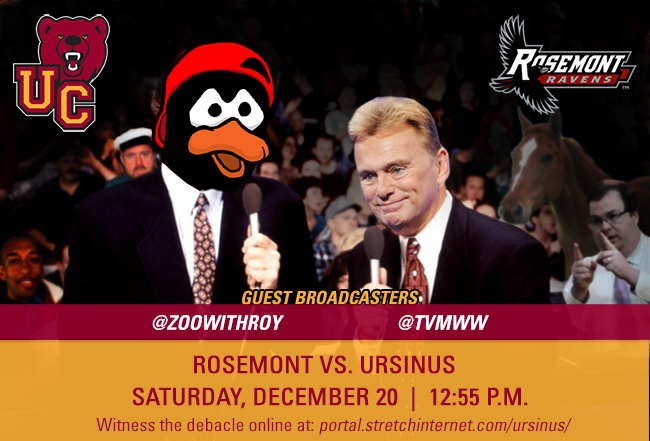 This Saturday afternoon, from some dingy smelly gym in Collegeville, PA, me and Zoo With Roy (never met him!) will be calling a college basketball game on Ursinus's sports website. I know, it's ridiculous, but it's also amazing! And OBV-EE-US-LEE, I'm sure you have a laundry list of questions because you're super annoying and always need MORE MORE MORE informashe, so here's my attempt at answering some of the FAQs that I've been hit with in the past 24 hours (by my mother).

Dude, what the fuck are you talking about?
This Saturday afternoon, a group of sweaty young men will be running around a gymnasium while trying to shoot a round leather ball into a steel orange cup, and me and a complete and total stranger will be talking about it, live, on the internet.

How the freak is this happening?
Here's the deal: there's this dude on Twitter named Wags, and apparently he's the Director of Sports Somethingorother at Ursinus College (which is a real school that has a real basketball team) and he thought it'd be a good idea to let me and Zoo call the game. So we are. And it's going to be incredible. Wags said he's baking cookies. Also his name is Wags!

So you've never met Zoo With Roy before?
Never. But we have emailed a bunch and obviously collabo-blogged and recently exchanged phone numbers. We also have plans to meet up for breakfast beforehand so we can get to know each oths and build a rapport and possibly share some Eggs Benedict (and then get double bing-bong dye-dyes shortly afterward).

Refresh my memory, what is "dye-dyes" again?
Diarrhea.

How can I watch this stupid game?
It's not stupid! It's pure, unadulterated fun. Online, at portal.stretchinternet.com/ursinus. I think we go live on-air at 12:50pm, but maybe 12:55pm, it's hard to say because we're getting our instructions from a guy who is literally planning on baking cookies for the game. So far the only directions we've been given are "no cursing."  I'm guessing they'll cut the feed around 1:04.

Hold up. Have you ever done anything like this before?
Actually, yes! When I was in my early 20s, I worked for the Scholastic Play-by-Play Network, and used to call high school football and basketball games on the radio. It was sort of fun and sort of a nightmare. Once -- for a game that was going to be aired on tape delay -- I had to sit in the stands (among the common folk!) and talk into a tape recorder while a bunch of high school kids just stared at me and got pissed off that I literally talked (and yelled) the entire game. It was so embarrassing. But I did give a shout-out to some hot mom who was sitting nearby and she totally made eyes with me and it was HAWT.

Speaking of total hotness, is TVMWMWMWMMWMWM still a thing?
Yes again! I've obvs been busy with the whole 700 Levvy thing and not blogging about television my wife watches (because my wife has been constantly watching old eps of 90210, ughghghhhh), but The Bach comes back the first week in January and, ugh again, yes, I will be watching and blorging about it.

Anything else?
Ursinus has not won a game all season. They're 0-7. The 0 stands for zero. As in no wins. They have yet to win a game. Sad for them.