Wednesday's Wifey: Andrea from 90210, the Oldest Person in the World


In my 37 years in this world, I have made a lot of stupid decisions. Like the time I brought a girl back to my dorm room freshman year and put on a Counting Crows CD. We stayed up all night chatting about her ex-boyf. It was awes.

There were the four years I spent teaching middle school, otherwise known as "Ev's Therapy Years." That was fun.

Then of course how could I forget about the BRILLIANT decision to start this blog. Great career move there, Ev. You're on your way to Grantland!

But of all the boneheaded decisions I've made, the worst one ever, BY FAR the absolute worst, was when I casually mentioned to my wife that old eps of Beverly Hills 90210 were now being shown on TVGN, which is an actual channel that broadcasts a signal that our cable provider provides.

Now you may think, "Whatever Ev, you're just being dramatic. That show's fun. It's stupid, but it's fun. So stop complaining. Just stop. For once in your life, would it kill you to stop complaining about something? And what is with the mouth breathing? There's ways to stop that, ya know. Breathe Rites. Surgery. Killing yourself." But you don't understand. In the past three days, we have watched roughly 84 episodes of this godforsaken show. My wife fucking loves it. LOVES IT. And I don't understand any of it. Like, why would the Walshes give their children names that sound sooooo similar? And is Megan Fox aware of what her husband used to sound like? And what the FUCK is wrong with Brandon?

But there is one character who I have taken a shine to. One character who I feel for, and relate to, and desperately want to hold in my arms. It's Andrea. It's obviously Andrea. You knew that before you started reading this. Her name is mentioned in the title of this post. It's a dead giveaway. Literally, if you look at the top of this webpage, you will see the word "Andrea" written in big, bold letters. There's even a picture of her. I don't know why we're still talking about it. Regardless, I am absolutely smitten with the 47-year-old high school student who has zero redeeming qualities.

There's just something about her annoying, boring demeanor. I feel sorry for her! Forced to hang out with all those young people, with a vagina that is essentially broken. Maybe it's her oversized glasses. Or her fashion sense (or lack thereof). Maybe it's the fact that I'm the type of person who writes stuff like "or lack thereof" and think that maybe she'd sleep with me. Either way, I'm intrigued. I'm so, so intrigued. I've never been more intrigued by anyone ever. So I figured why not make Andrea this week's Wednesday Wifey and do some research to find out who the hell this lady is (and see if she's still alive).

Turns out she is!

And is currently married to Alan Thicke's brother, Dick Thicke (not his name). Absolutely amazing that Dick Thicke buttons his shirt allllllllllll the way up. And not just on this one occasion...

The whole point of not wearing a tie is that you don't have to button your shirt all the way up! I mean, what is this guy doing to himself? YOU DON'T NEED THAT TOP BUTTON, DICK. I went to a wedding last weekend (whilst wearing a tie) and complained the entire night that I was being choked out by Ricky the Dragon Steamboat. Nice hedges in Andrea's backyard by the way. Looks like Wrigley. Do you think he stuffed that shawl in her mouth later that night? I do. I obviously do. 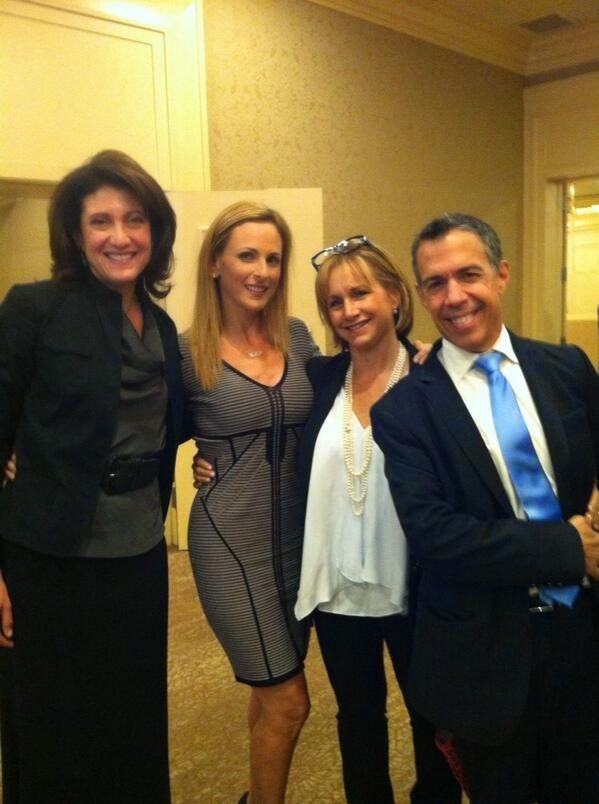 Despite being out of the public eye for well over a decade, Andrea still has a bunch of Hollywood friends (which is nice for her!). Here she is with left to right: Billie Jean King, that deaf lady (by the way, how bout her BOD?! I see you def lady swingin' out dem birthin' hips!) and Irv Gumbel. 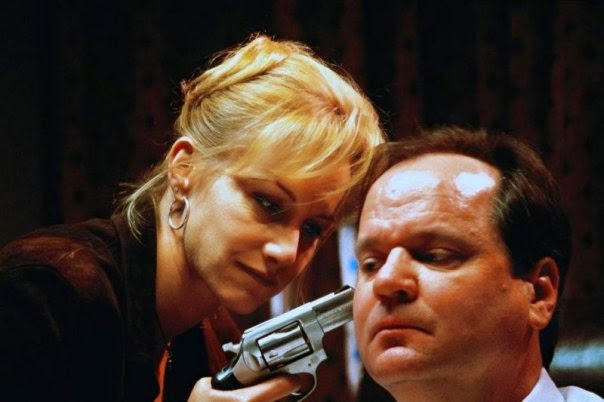 Turns out Andrea is still making movies. Here she is on the set of MALPRACTICE (directed by Micky Dolenz from the Monkees and I'm not kidding!). For the record, this picture was taken in 2001. That's 13 years ago. So Andrea is now 13 years older than she looks in this pic. Yeesh.

Pretty hot gunplay she's getting into there though. Not surprising considering Andj is a total nymph-bot. Here's proof: 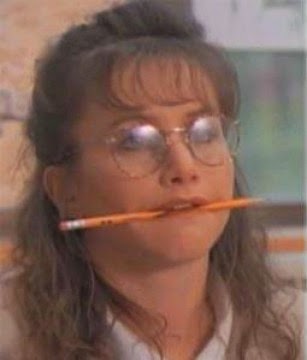 Be honest, this picture is hot as fuck. Gagging herself with that Dixon Ticonderoges. The taste of stale wood in her mouth. Struggling to talk as she begs for an extension. "But Mr. Evster, I just need one more night to work on my paper!" Yeah, you need one more night, all right. One more night in my dank basement. *kicks water bowl toward groveling woman, water spilling out onto the cold pavement* No idea where I'm going with this. That's not true. We all know exactly where I'm going with this. I'm making a teenage woman drink out of a water bowl. It was the obvious next step. Maybe I'll bring her some saltines too (if she's good).

Seriously, Andrea is HAWT and you know it.

So let's go rapid fire through some of her hottest super sonic hotness pics. 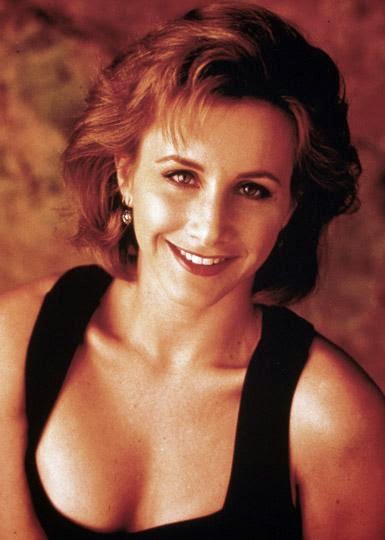 Here's Ahhhnndrea lookin' like a cross between an old Chrissy Evert and an even older Martha Washington. Cleave is straight bangin' too. You can't deny it. 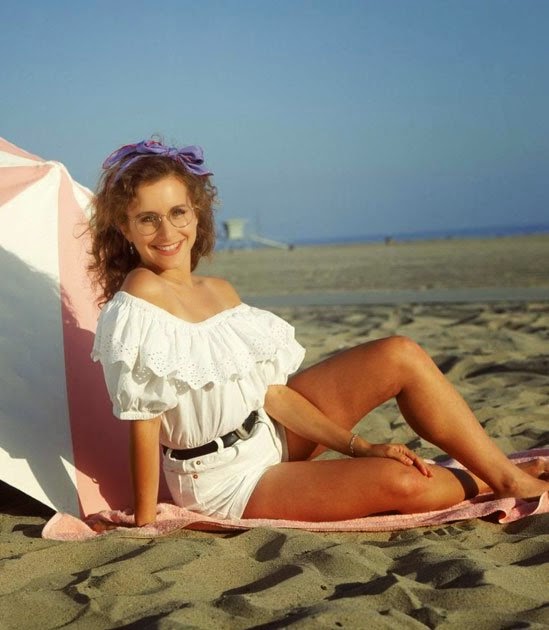 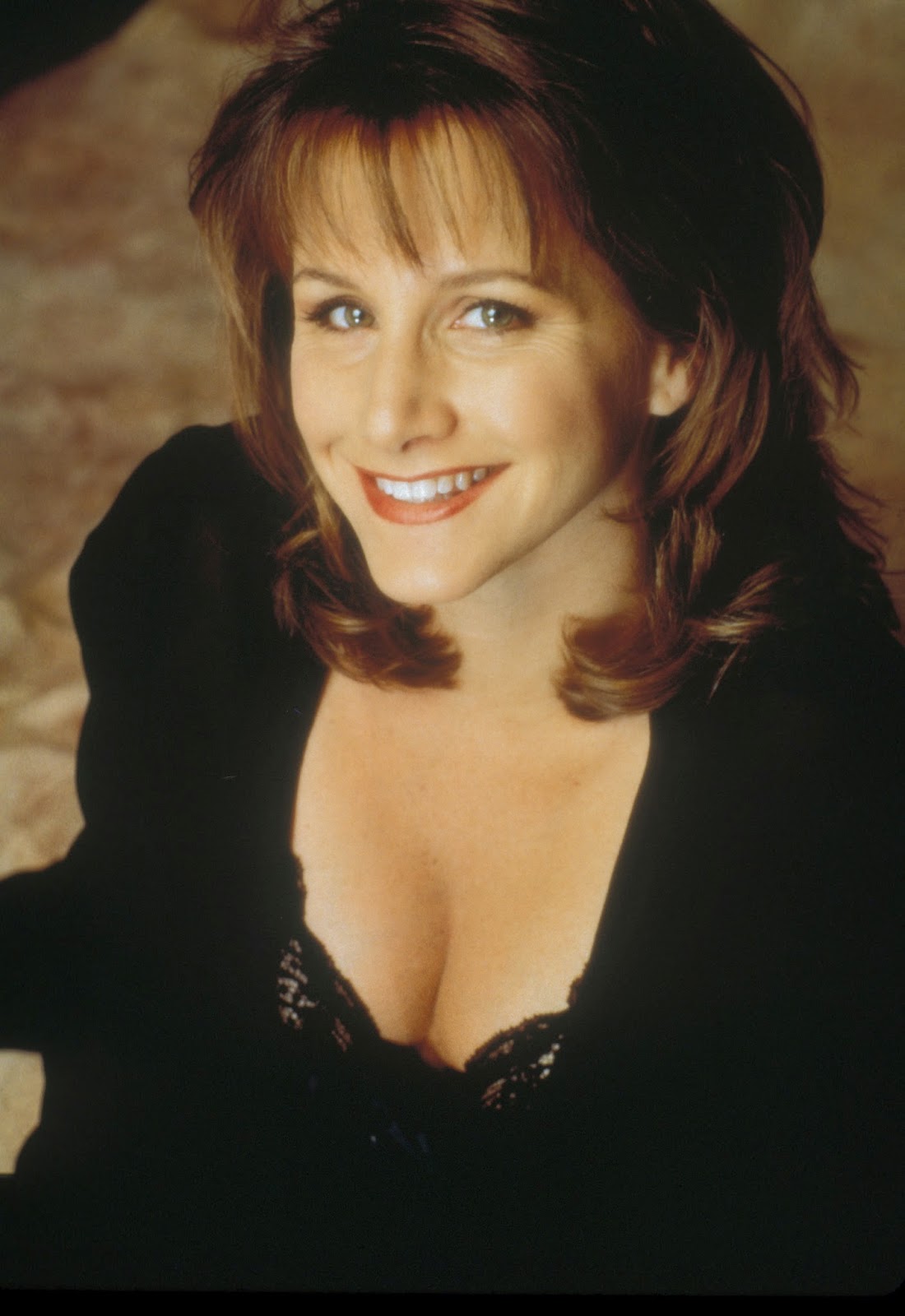 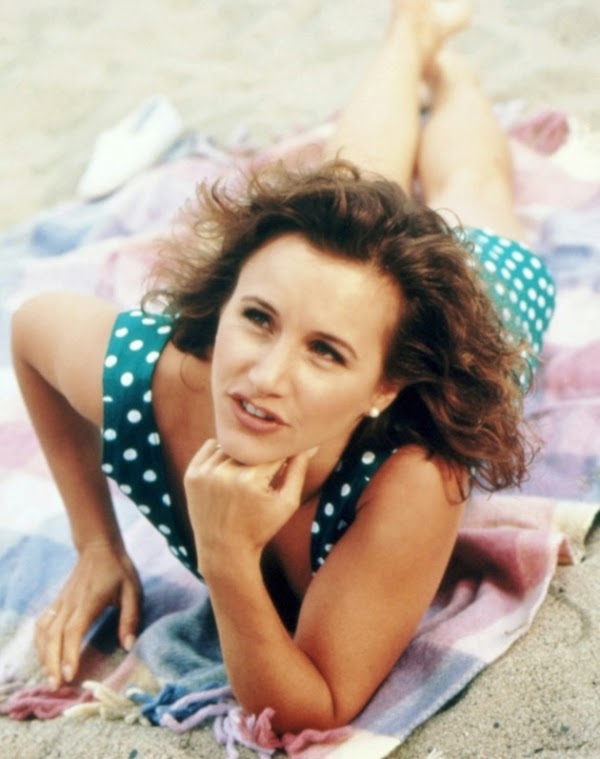 Little known fact: Most chicks prefer to climax on their stomachs. 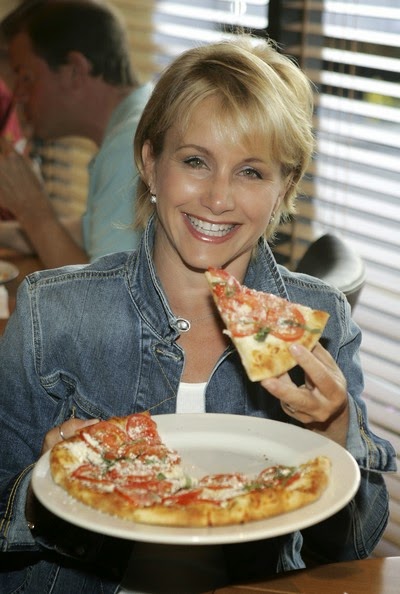 84 years old, and she's still got it. Not really diggin' that low-fat vegan cheese pizza, but lovin' her Katie Couric Jr. hairstyle. I have no idea what the point of this blogpost is. Absolutely no idea. Thanks for reading.

I love you, Andrea.

From now on, I think I'm gonna post a new TVMWMWMWWWM jawn every Wednesday. So there'll be Eagles Report Cards on Mondays at Zoo With Roy, TVMWMWMMW on Wednesdays, and my 700 Levvy column on Fridays. How's that sound? Who cares. Here's a list of animals with fraudulent diplomas. My favourite is Oreo Collins.


Obviously I don't know shit about shit, but there's some show called Couples Therapy on VH1 tonight and Juan Pabberstein is going to be on it.

The show is hosted by a lady named Dr. Jenn, an actual doctor who spells her name with two Ns, and puts pictures of herself on the internet that look like this: 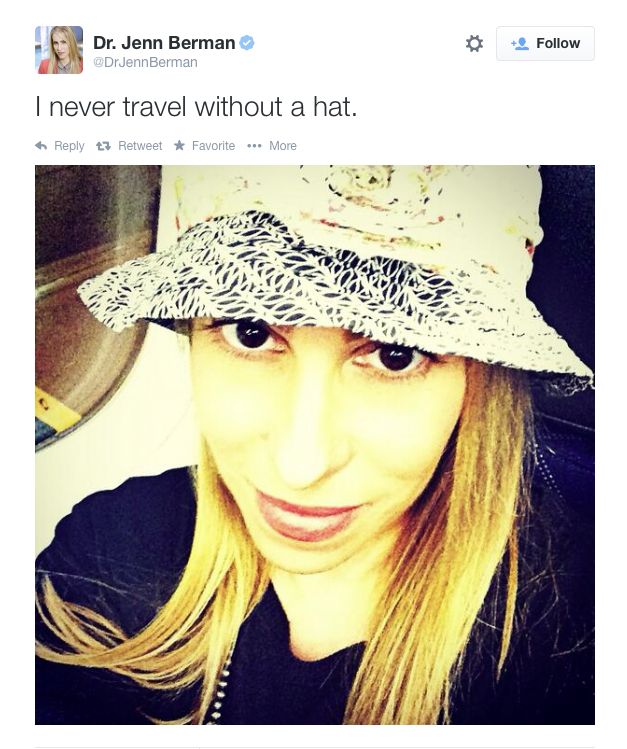 That's actually a pretty smart move -- keep the sun rays off your face.

Anyway, I will most likely not be watching this show tonight and that's obviously a lie.


Summer is finally over.

There's some great shows coming to TV this fall: Rain Man the sitcom; Four Guys and a Dog; Frorvsville! (really looking forward to that one), but here are a few others that are 100% TVMWMWWWWMW approved.

A spinoff of Chris Lilley's Summer Heights High, Jonah from Tonga is hilaaaarrrrrrious. (For those of you who are like, "Ev, what the fuck are you talking about?" Chris Lilley is an Australian actor/writer/comedian who has had a bunch of shows on HBO where he plays like a million characters, kinda like Eddie Murphs. Summer Heights High is probably his most well-known show, about a public high school in Australia, and Jonah (a Tongan aborigini teenager) is his funniest character and a total, total shithead. The show follows Jonah (Chris Liley) and his crew around as they curse off teachers, dick tap each other and breakdance right in people's fat faces. Highly recommended for those of you who like British-type humour, dumb teenage bullshit, and shows that don't suck butt. For the record, my wife has never once watched this show with me. Ever.

This show sounds supes lame: a stupid couple in their late 30's struggle with raising kids and being old and shit, but it's actually really really funny and dark. Married stars Nat Faxon (Ben and Kate, writer of The Descendants) and some blonde lady (Arrested Development, those Sprint Framily commercials) as the main couple where the dude is obviously an idiot and his wife constantly gets mad at him. It also stars the lady who plays Mona Lisa on Parks 'N Rec and she's amazing. Overall the show is very, very good and not nearly as lame as it sounds which I admit sounds lame as butt.

One of the best sitcoms of alllllll tiiiiiiiime. SAID. This jawn was only on the air for two seasons because the world is a sad and disappointing place. Party Down is about a group of struggling actors who work as caterers in between auditions and shit. The show stars Adam Scott (Parks 'N Rec, absolutely everything, like literally everything) as Henry, a dude who had five minutes of fame after starring in a beer commercial and owning the catch phrase, "Are we having FUN yet?" It also has Ken Marino (the State, Wanderlust, Wet Hot American Summer, Burning Love, funniest dude ever) who plays crew chief Ron Donald (I mean, that's a good enough reason to watch right there, the guy's name is Ron Donald) and has dreams of one day opening his very own Soup R' Crackers, the fastest growing non-poultry, non-coffee franchise in Southern California. Honestly the show is fucking amazing and filled with an amazing cast: Jane Lynch (from all of Christopher Guest's shit and Glee), Lizzie Kaplan (Masters of Sex, va va va voom), the weirdo/adorable dude Bill from Freaks and Geeks/every Judd Apatow movie ever, the lady who played Sarah Marshall, all sorts of other ill muthafuckaz. Great show. Great cast. Great ending of this paragraph.

Besides being maybe the best physical comedian out there, Katt Williams is hood as a muhg. This latest special was directed by Spike Lee, which I guess means something, and the only reason my wife and I haven't watched it yet is because her stupid friend Aubre said she'd come over with her stupid boyfriend to watch it, but they're too busy sucking each other's butts and I hate her.

I saw this guy at Odd Ball Fest this summer and he was my possibly my favourite (in a lineup that included Louie CK, Dave Attell, Sarah Silvs, Hannibal Burress and Chris D'Elia). He's super relaxed and cool, kinda like Dave Chappelle, without the wacky shit. Honestly he's nothing like Dave Chappelle. He's just black. Whatever, he's about to blow up. Watch his special. Or don't. I seriously, seriously, seriously don't give a shit about anything you ever do.


Have you been reading my goddamn sports column every Friday on The 700 Level dot com? If not, I don't blame you, it's honestly not that exciting. JK IT'S FUCKING AWESOME. So if you want to read some ill ass shit, check out some stuff here. Or just look at this pic of a lady dressed up as a naughty giraffe. That's what I'd do, obviousslslsyylyyyyyy.