Sometimes when we watch Game of Frones we get so caught up in the drama and the dragons and the butts and the tits and the frogs and the buttholes and the okay that's enough, Ev... that we forget that these are actual human beings who act for a living. I'm not saying that we get convinced that dragons are real or that Valeryian steel is a thing, I'm just saying that the guy who played the White Walker on Sunday night is a real person named Steve. Acting is weird. Fantasy worlds are stupid. And this week, when they showed that goddamn baby being given to the White Walkers, we can't overlook the fact that that was an actual goddamn baby!

Somewhere out there, two biological, idiot weirdo parents thought it'd be a good idea to lend their NEWBORN CHILD to HBO so they could film a television show. How is this possible? How could someone put their kid in this situashe? Every parent I know who has a goddamn 5-day-old is constantly freaking the fuck out and making everyone around them use hand sanitizer. But these parents -- THESE PARENTS RIGHT HERE -- felt totally comfs just handing over their newborn to a guy dressed up as a dirty ass swamp creature.

Look at this baby: 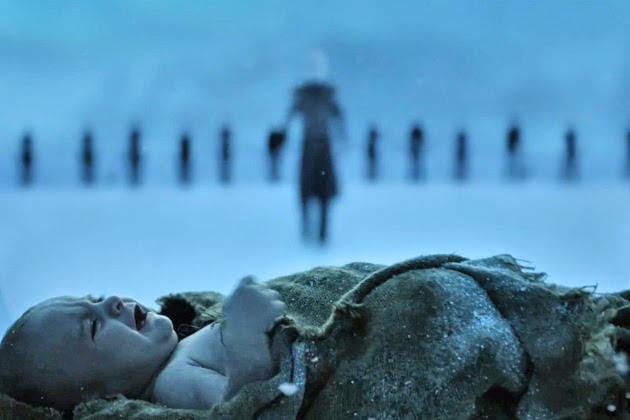 He's freaking the fuck out!

He's not acting, folks. He is not acting. He is legitimately filling his pants with shit.

As a TV director, you can't be like, "Hey baby, I want you to scream your goddamn head off and piss into this tarp." Babies don't understand stuff. I know this because I'm constantly telling them to stop staring at me and laughing and they never once listen! If you're a TV director, you just have to put a baby down and call "Action!" and hope he doesn't drool all over his own tits. For the record, this baby's performance was fucking dope. He probably filled his pants with so much shit. But that doesn't mean I condone putting goddamn babies on television shows.

That being said those White Walkers look like very caring and nurturing parents and I'm happy that they didn't chew that baby's face off.