Hey all you wonderful people who I love very much and appreciate your time and devotion to the world's biggest pile of wet, hot, disgusting internet garbage, here's another edition of #GoogSearches.

For those of you who have no idea what I'm talking about, below are things that people have actually typed into Google, that led them to this here website. 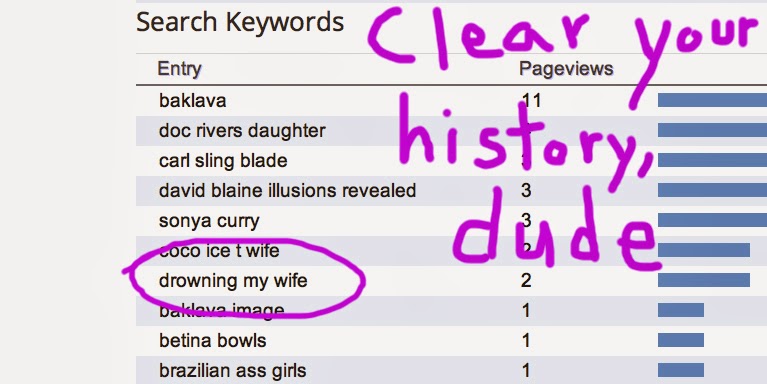 Email ThisBlogThis!Share to TwitterShare to FacebookShare to Pinterest
Labels: GoogSearch


Welcome to a new weekly feature here at TVMWMMWWMWMW, the DWTS Smokehouse Mountain Shakedown, by far the stupidest (and yet smokiest!) DWTS recap on the internet. How long do you see this one lasting? Three? Maybe four weeks? Whatever, please stop pissing all over my ideas. This one's gold, Jerry, gold!

It is truly incredible how much everyone gropes each other on this show. It's like walking through the hallways in middle school. And it's not just whilst dancing, it's whilst being interviewed or whilst doing nothing. Last week, Charlie's partner was legitimately circling his nipples while he tried to answer a question about the Cha-Cha-Cha. Who could possibly talk to another person while someone caressed their nippers? I know I couldn't. And I've tried. Oh Lord, have I tried.

Watching all this groping has affected my wife, too, who has not been able to keep her damn hands off me the last two weeks. Last night in bed, while she was spooning me, she started taking her knees and jamming them into the back of my thighs. Just like a total jam job. Then I started laughing, so she jammed her knees in even DEEPER into my thighs to the point where she was basically pedaling my hamstrings like a bicycle. After around 15 seconds I asked, "What the hell are you doing?" but she just kept pumping her knees and pulling back on my shoulders for leverage. I have no idea what the point of this story is or why I'm sharing it, but I feel like I SHOULD, and that's what makes this blog special! Let's be honest here, the Smokehouse Mountain Shakedown could not be off to a better start.


Normally I would start off this post by saying something like, "Y'all gotta watch this show. It's not horrible." or "Seriously. It doesn't suck." or "I am telling you, Russian women are not afraid to give birth on live TV," but if you're here, and you're reading this, then you already know how bonkers DWTS is. There's no reason to try and convince the non-DWTS watchers to tune in. The show is fun, we're all on board and Carrie Anne Inabla is as emotionally stable as a bowl of soup. So let's just sit back and enjoy the ride -- all 7 of us -- and break down last Monday night's premiere.

To help me out, I've asked Good Morning America's George Stephanopoulos -- an ABC insider and a man with the kindest, softest eyes -- to share with us his Top 4 DWTS newsworthy headlines following Week 1.

Get your own blog!!!

Holy Snotballs. Winnie Cooper is on Dancing With The Stizzies.


The new Dancing With The Stars seez is bonkers.


Let me start off by saying fuck Chris Harrison. Fuck him right in the face. That guy, that little weasel, stirring up shit on After Da Final Rose, berating Juan Pabs and insisting he admit he was in love with Nikki, parading around the television audience like his name was Phil Donahue. Let me tell you something: I served with Phil Donahue. I knew Phil Donahue. Phil Donahue was a friend of mine. Harrison, you're no Phil Donahue.

Email ThisBlogThis!Share to TwitterShare to FacebookShare to Pinterest
Labels: The Bachelor, The Bachelor: Juan Pablo

Full disclosure, I'm friggin' tired. Tired, tired, tired. Tired of blogging, tired of wearing pants, tired of tha entire blog game hustle. So for this week's recap, I'm taking the week off and asking my good pal Pinetop Jenkins to step in. If ya don't know, Pinetop is a blues guitar legend and an 88-year-old sexual powerhouse. I think he''ll bring a fresh voice to this old, stale, stupid, stupid, stupid blog.

Before last night, Pinetop had never seen the Bach before, but when I asked my old pal to do me a solid, he checked it out. So without further fribble-frabble, I'm gonna pass the mic over to my good friend Pinetop so he can share his thoughts on last night's "Women Tell All" episode.


Pinetop Jenkins: Now look, we need to talk about that god damn dog. Just sittin' up there on that stage. Can't have no tee vee progrum with a damn dog on stage! Them ladies talked for 90 straight minutes, and not one of 'em mentioned that damn dog. I remember back in nineteen fifty three, played a show in Shreeport, Loozeeana, and a damn dog got up on stage and damn near bit my leg off. Musta hung on there all night, just chewin on muh leg while I tried to play muh gee-tar. Feisty little fella. Played a show in Bat-awn Rouge the next day, damn dog still hangin' on muh leg. That dog and I got to be pretty good pals tho. He'd a chew on muh leg, I'd throw him a piece of pee-can pie. That is til I shot him. Shot 'im right in da ass. Can't have no damn dog hangin' on yuh leg! And ya can't have no television progrum with a god damn dog on a stage. Mighta bit someone!

Email ThisBlogThis!Share to TwitterShare to FacebookShare to Pinterest
Labels: The Bachelor, The Bachelor: Juan Pablo

The Last and Final (those words mean the same thing) Oscar Chat with Feddd & Sara Circs!!!


Below you'll find the final installment of the internet's least popular blogpost series. Every week, from January 'til the Oscars, I checked in with TVMWW's Hollywood Correspondents, Feddd and Sara Circs, to chat about movies. Their credentials are as follows: Feddd does not have cable and steals internet from his neighbor so he can watch Netflix, while Sara has two kids and has not been to the movies in over five years. Onto the series' riveting conclusion... our gchat about the actual Oscars!

me:  Hey guys, I thought the Oscars were kinda boring. I mean, they were fine, whatever, they were boring and fine, but whaddya say we just post a pic of Jared Leto holding a chili dog?

Sara:  Sounds good to me.

me:  TV My Wife Watches, everybody!