Hey all you hamburgers and cheeseburgers. After live-tweeting the Emmys Sunday night and only losing eight followers, I figured I'd keep this train rolling and ask TVMWW’s Hollywood Correspondent, Sara Circs (aka Bazooka Mom), to join me to talk about Emmys fashion.

So enough with all this jibber jabber, let's get to it! 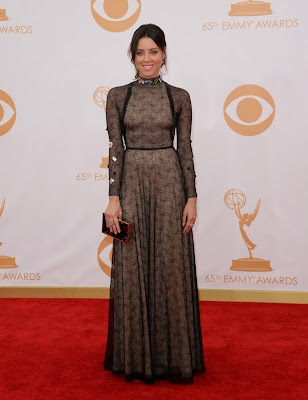 The Evster: I like what this lady is doin here. Really goin' out on a limb with the whole fab goth thing, but then again I don’t know any fab goth chicks who carry a clutch, so maybe that’s not what she’s doing. I also don’t know if a “clutch” is the right word for what she’s carrying ... ugh, yes I do ... it’s obviously a clutch. Also, carrying a clutch around all night with you must be the worst. I mean, why not just make a dress with a little zip-up pouch like those old Kangaroos sneaks? That way women could carry around their essentials like lip gloss, a credit card and a vial of cocaine while also having their hands free to carry an even bigger bag of cocaine. Also, her tits are too small. Grade: B-

Circs: I was taken aback when I saw this because I was like, “Wow, she looks pretty hot, and I never thought of her as hot before, and this is kind of sophisticated, which also isn’t really how I think of her” and basically it was a She’s All That moment for me, except replace removing the pretty girl’s glasses with sitting on my couch eating beef jerky and weeping soft tears of loneliness. Anyway, even though her boobs aren’t that big and that is MASSIVELY OFFENSIVE TO ME, I think the dress fits her really well and is very very flattering and I actually think I like everything about it, so you can go fuck yourself, everybody. Sorry. Sorry. Everything’s cool. Grade: A- (could use a splash of color)

The Evster: Her necklace has a little splash of color. 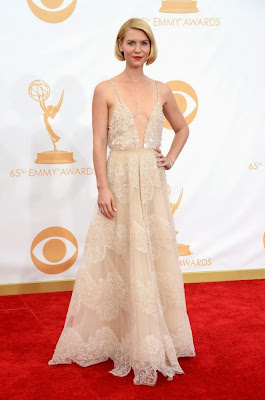 The Evster: Okay, I recognize that this is a nice dress. The frills, the lace, the airflow under her pits giving off a subtle hint of Tom’s of Maine. BUT C’MON CLAIRE. I know what you’re capable of. I’ve seen you get railroaded by Agent Brody. I’ve seen you milking cows in Temple Grandin. So I must ask: WHAT’S UP WITH THE DOUBLE MASTECT? Grade: F minus!

Circs: I see you decided to go with that double mastect joke, Evan, with no regard whatsoever for Angelina Jolie’s feelings.

The Evster: Yeah, I wasn't sure if I wanted to go through with the double mastect joke, but I did it, and it’s out there, so what can I do? (I mean, I could obviously delete it, but I’m not gonna.) I also sort of feel like Claire used to have bigger titties and got a double mastect just so she could wear this dress.

Circs: Just try not to take her lack of breast tissue as a personal affront. I’m 85% sure she did not have you in mind when she was going (halfway) through puberty. And no, she never had bigger titties. We can do a whole Claire Danes red carpet retrospective, if you like.

The Evster: Pretty sure I saw her titties in Agent Brody’s mouth.

Circs: Pretty sure this is why Jordan Catalano was embarrassed to be seen with her.

Anyway, this dress is definitely pretty and I love how she was basically telling everyone (but really mainly the Evster) that she doesn’t give a fuck that she has no boobs, ‘cause she has a hot (possibly gay) husband and a bunch of Emmys and a kajillion dollars and a pretty dress with sequins.

Oh, but I hate her hair and this color washes her out and Jordan Catalano used to go the same physical therapy gym as me--what a complete freak. Grade: B- (who am I kidding; get some tits Danes) 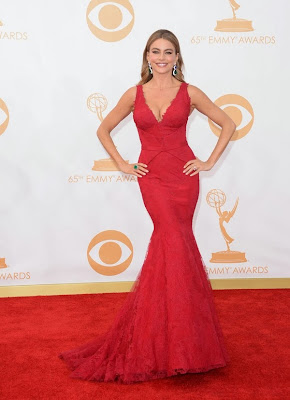 The Evster: FINALLY WE ARE GETTING SOMEWHERE. Actually, you know what? I’m not gonna do it. I’m not gonna write about Sofia’s jingjongs because that’s just too easy. Instead, let’s talk about the lovely contrast of her emerald jewelry against the crimson of her dress OMG THIS IS SO BORING. Grade: Grade A Beef!

Circs: WE GET IT, SOFIA VERGARAREAREARWASA. Fishtail dress, hourglass figure, huge this, tiny that, when does everybody shut up so I can finally punch you in the mug? P.S. I hate your dumb show. Grade: Who cares, I just popped a vein in my forehead. 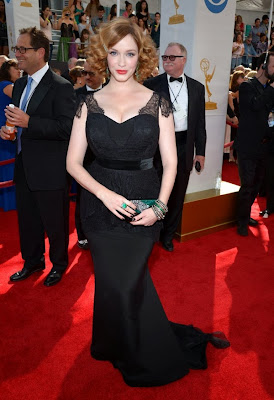 The Evster: BREAK OUT THE BAZOOKAS, BAZOOKA MOM, ‘CUZ YOU AIN’T NEVER BLOWN UP A DRESS LIKE DAT. This lady is a LEGEND. A living, breathing, bazooka-bombing legend. Also, check out Wilford Brimley behind her -- JUST HAPPY TO BE THERE -- completely ignoring the fact that the woman in front of him is about to blow up the red carp. And then there’s the other guy on the left drinking a diet orange soda? Love it! Grade: BOOM GOES THE DYNAMITE!

Circs: Evster, just when we think you’re going to be predictable, you say exactly what we expect you to say.

I honestly don’t even know what, if anything, Christina is wearing right here. Of course it doesn’t matter. Do you think when she gets dressed for the Emmys she’s like, “Please hand me that drape, because let’s be honest, not even I can think about or pay attention to anything besides--look, do I still have to even talk about this?”

Or maybe she goes to Christian Siriano and picks out something nice that flatters her shape. Grade: ??? Eleven. 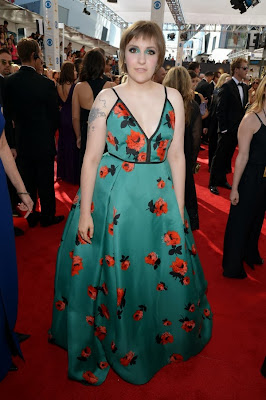 The Evster: Poor Lena Dunns. It doesn’t matter what she wears, people are gonna pick her apart. I mean, that’s a pretty nice dress, too. I’d prefer ladybugs over flowers, but that’s cool, I like the colors. And the eyeliner, I mean, it’s dumb and it’s way too much, but it’s fine, it’s perfectly fine. It really is amazing how many dickheads walk around these award shows with headsets on. There is literally nothing stupider in this world than wearing a headset. By the way, as I am typing this in my cubicle, I am currently wearing thirteen headsets. I could definitely see Lena Dunns having a severe mental breakdown at a very young age. How cute are ladybugs though? Excuse me for a sec I'm getting like nine phone calls. Grade: B-

Circs: I actually love this, love the color, love the eyes, love the look on her face, and am absolutely batshit NUTS about the fact that there are no ladybugs on her dress. I saw this in the audience from sort of a distance at one point and found this green-with-red-speckles blob pleasing to the eye before I even knew what it was. And by the way, I am not referring to Lena herself as a blob and genuinely think she looks great here. The dress just looked like a blob in the audience against all the boring black. NICE BLOB, LENA!! Grade: A 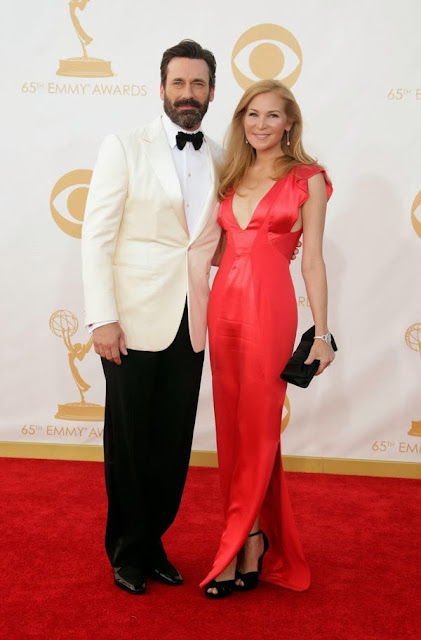 Jon Hamm, My Wife's Favourite Person in the History of the World

The Evster: Awesome beard. Wife is probably a very, very, very nice and understanding human being. Grade: A

Circs: My feelings about Mr. Hamm are complicated. I both loathe and am attracted to his character of Don Draper more than I am to Hamm the actual mann. I mean, I love facial hair, but look at what a doof he is. Or not? I dunno, he’s all up in my precious comedy world and I’m not sure how I feel about it but it’s fine, whatever, I feel like I’m taking this question entirely too seriously all of a sudden when I should just be writing about getting smoldered by his hairy face. Ugh, he’s fine. His white/off-white coat looks dumb to me but I know absolutely nothing about men’s fashion.

As for his wife, Kissing Jessica Stein remains an awesome movie that I will watch absolutely any time it airs on Starz. Grade: Are beards uncomf? They look uncomf.

The Evster: Meh, not really, but they can be during the summer. Or if they get caught in your headset(s).

Circs: Hey Evster, quick questch: Do you realize that all of these people so far have been white? Should we have a non white person in here somewhere?

The Evster: Were there any black people there last night?

The Evster: Is she a quarterback? 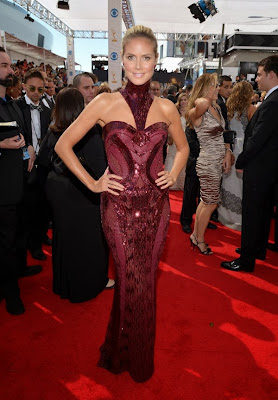 The Evster: This dress is obviously retarded (and yet sort of amazing). The fact that it chokes Heidi out around her neck is super hot. Little known fact: European chicks who like to be choked out are WAY WAY WAY hotter than your average American prude. So bravo, Heidi Klum, bravo. Or should I say, “Bråüvenblürg.” Grade: A 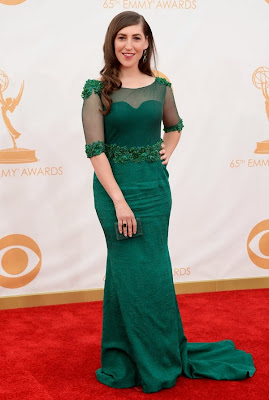 The Evster: Well it looks like the Maid of Honor is finally here! lol lol omg lol jk jk omg No but seriously is she on her way to Stacey’s wedding? lol lol WHERE ARE YOUR FLOWERS, BRIDESMAID? lol lol omg Hey Blossom, what table are you sitting at? 'Cuz we’re at Table14! lol lol omg jk HEY PASS THE BREAD AND BUTTER WOULD YA I'M STARVING jk jk lol omg jk ok I’m stopping. Grade: F

Circs: I had an aunt who died while dressed as a bridesmaid and watching Blossom, so this isn’t that funny to me. Grade: F 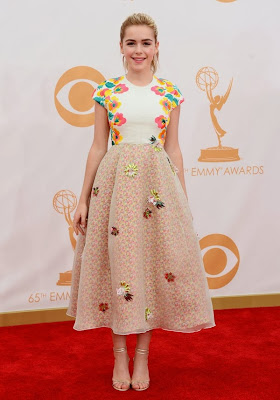 The Evster: Geez Louize, this entire time we’ve been writing this, Circs keeps emailing me on the side, saying, “Put in Sally Drapes! Put in Sally Drapes!” so here ya go, Circs, here’s your precious photo of Sally Drapes. She looks nice, with her little flower pasties pasted on her little flower dress. Although she kinda looks like a basket on the front of Mary Poppins’s bicycle. Did Mary Popps even ride a bicycle? If she did, it was probably a stupid one. Sorry, no idea why I got so angry all of a sudds, I actually really like bicycles and think that Mary Popps was supes hot. I just wanna see more titties. Grade: No

Circs: Upon first glance, I thought this was wack as wack can be. But then I sat back, studied it for a few hours, and realized it’s a goddamned work of art. I don’t feel like getting into all of the stuff about how it’s age-appropes, even though it is, because that’s boring. There shouldn’t be a question about it being age-appropes. If you’re underaged, be appropes, guys. It’s that simple. Grade: A+ The Evster: Man, did you read Anna Gunn’s op-ed in the NYT about the amount of hate that she -- both as a person and also Skyler the character -- gets from being on Breaking Bad? It was very well done and definitely worth reading and makes her even more attractive than she is on the show. (I like to watch her have sex!) But still, her titties could use a little work. Grade: C

Circs: I read the op-ed. It was sorta interesting. Grade: C

The Evster: Yeah, it wasn't that interesting. 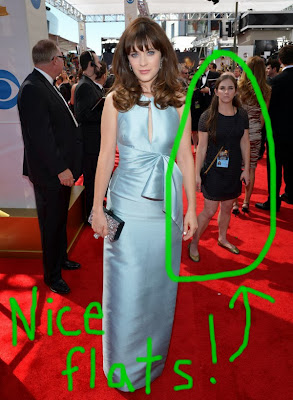 Circs: I think that by blinding this chick with a flash, the photographer actually saved Zooey Deschanel from being assassinated. Grade: FFFFFFFFFFFFF

If you wanna follow Sara Circs on Twitty Twitty Twang Twang, you can do so @SaraCircle. You can also follow me @TVMWW. Or you could just look at this horse. That's what I'd do. He's a nice horse.

Also, here's last year's Emmy post for all you TRUE hustlas out there.