Back in 1990, a little fella who goes by the name of PAT SA-SA-SA-$AJAK tied the knot with a 24-yr-old Playboy Playmate, and had their marriage featured as the cover story for a little publication called PEOPLE FUCKING MAGAZINE.

ONLY THE MOST WIDELY-READ PUBLICATION IN THE WHOLE ENTIRE WORLD FOR PATIENTS WAITING TO HAVE THEIR WISDOM TEETH RIPPED OUT OF THEIR GUMS.

And while this may be news to you -- that Paj $aje was, and is, a big enough star to grace the cover PEOPLE FUCKING MAGAZINE -- it's not to me. This guy is a pimp and always has been. So in honor of Pat celebrating his 23rd wedding anniversary, and the fact that I just made a dentist appointment, let's get to know this Wednesday's Wifey, Lesly "No I Don't Need No Goddamn E in My First Name" Brown Sajak. 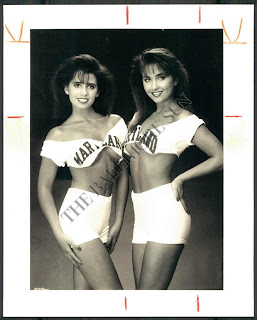 Here's Lesly (on the right) along with her really good friend, proving that you really can't beat a nice underboob.

It has been said -- possibly even on this very website -- that you can beat a nice underboob, but you really can't. And even though Lesly's underboob is mostly covered up by that stupid Baltimore Sun watermark, you can still tell that she has a really nice, non-sweaty underboob.

It was underboobs like these that led a 17-year-old Evster to apply to -- and later attend -- the University of Maryland, a place where in four years, I saw a grand total of three underboobs, two of which belonged to my freshman roommate, Walter Beardsley. The other belonged to Debbie Coleman, a very kind, sweet, possibly HIV-infested woman who once threw up into my shoes. It is for this reason, and this reason only, that I will never give that goddamn institution one more cent out of my pocket. (Also I have no money).

I actually had a Family Studies class (which is a real class by the way!) with a girl who ended up being featured in Playboy's Girls of the ACC issue while I was at College Park. She was actually not that hot, and might've been a man, but that didn't stop 20-year-old Evster from trying to smell her hair whenever I walked by her in class, nor did it stop her from trying to punch me in the balls (which I found to be a MAJOR turn on). 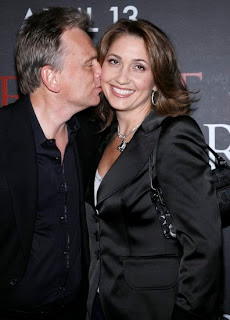 Lesly has aged quite well, which is probably part of the reason why $ajak has stayed with her all these years, unlike that prick Chris Harrison who recently ditched the mother of his two children. In the picture above, it looks like $aje is telling Lesly how beautiful she still is (or he could just be smelling her skin), but either way you know her panties are getting WET because THAT'S HOW $AJAKS DO.

Also chicks from Maryland tend to have really wet panties. 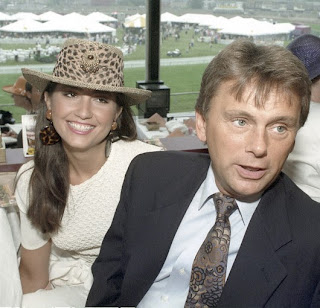 If there's one thing people from Maryland love (besides their state flag, and women with wet panties) it's going to the Preakness.

As a college sophomore, I attended the horse race in 1996, thinking you get to sit up in the stands, have a nice time, smoke some weed and pet a bunch of horses. Nope, you actually stand in the middle of the racetrack for seven hours in the blazing sun, surrounded by the same idiots who live in your dorm, while having horse-like women attempt to barf in your shoes.

Pat and Lesly obviously had primo seats for the event, so that's nice for them, even though it kinda looks like Pat's about to barf in this picture. 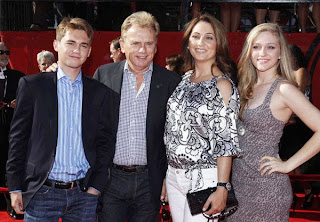 Another reason why $ajak has stuck with Lesley is because of the two children they have together: Pat Jr. (that's not his name) and Maggie, who is an aspiring country music singer.

Pat Jr. is obviously fucking awesome  -- "I got one hand in my pocket, and the other ones, making a PEACE sign" -- it's not even making a peace sign. It's not doing anything. It's just being a hand. I just got that song in my head and had to write it down. I seriously have no idea why you continue to read this blog. No clue.

Maybe it's because I post super hot pics of hot moms wearing white pants with no belt. I love a woman who doesn't wear a belt. I don't know why, probably because I'm a super-sonic pervert, but there's just something sexy about a woman whose pants may fall off at any given mome.

Can I buy a vowel, Lesly?

(Evster's Note: I don't know what that last "Can I buy a vowel?" sequence was all about. I think that was Pat $ajak making sexy talk with his wife. I'm not sure, I just thought it was really funny. I recognize that I'm probably the only one. Thanks again for reading. I really appreciate it.) 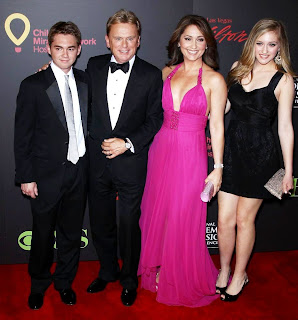 If there is one problem the $ajaks have -- besides looking SMOKING HOT ALL THE TIME -- it's that they have a hard time figuring out what camera to look at when standing on the red carpet.

In this shot, Pat Jr. is staring off into right field. Not sure what he's lookin' at (probably a hot chick, I see you little man!), but he totally ruined what could've been a super sexy family photo. 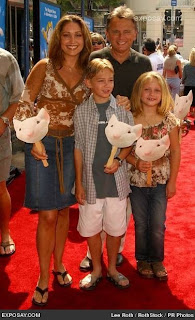 Once again, Pat Jr. is screwing it all up. Why is he looking off to the left?! What is over there?! The only acceptable reason for him ruining another family photo would be if the Stuart Little was standing off to the side. I have a feeling he might've been. 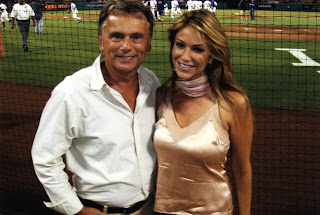 This is not Pat's wife. This is some other lady who asked to have her picture taken with $aje before a Dodger game. I am not entirely sure what happened after this picture, but I think we all know what happened. 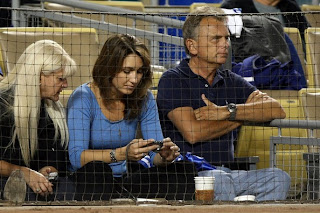 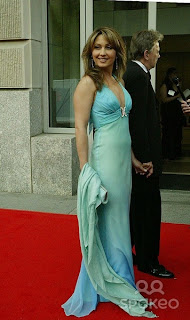 Damn girl, who you think you smiling at like that?!

You don't know me! 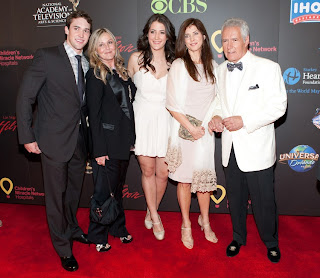 Whatever Trebek you fat fuck!

You don't know how real Gs do!