Oh my God WHO CARESSSS???

Let's recap the last few eps of GAME OF FRONES!!!

Remember a few weeks ago when I said I wasn't that into the whole dragons thing? (There's no way you remember that. I'm not even sure if I ever mentioned it. WHO CARESSS?!?!?)

WELL LET IT BE KNOWN THAT I AM WAY INTO THE WHOLE DRAGONS THING.

HOW COULD I NOT BE?

True story alert! When I was a teacher for four years (FOUR OF THE MOST MISERABLE YEARS OF MY LIFE), every single day that I pulled into that dumb school parking lot I prayed that the school would be on fire. EVERY SINGLE DAY. And it never happened. And THAT MADE ME SAD. Well, guess what? Just last week, the school where I used to teach WAS BURNED TO THE GROUND! BY A STUDENT! THAT'S NOT INTERESTING AT ALL AND I'M NOT SURE WHY I SHARED IT.

BACK TO GAME OF FRONES.

What a move by Khaleesi! For those of you who don't watch, basically this blonde lady with very milky boobs pulled off a double-bubble switch-a-roo jing-jang on this guy and took control OF EVERYTHING. Possibly the greatest mome in GAME OF FRONES history?

Storyline That is Borrrrinnngggggggg
Bran's stupid three-eyed crow dreams. WHO CARESSSSSSSS??? Unless this has some sort of bonkers payoff like a three-eyed crow pecking a guy's face off, I've seen enough of Bran and his dumb dream sequences. Also, did you realize that the little dorkbutt who recently captured Bran is the little shitbag drummer from Love Actually????

The Mayor Carcetti Memorial "That Guy's On This Show?!" Award
With all apologies to the little shitbag from Love Actually, and Theon Grayjoy's horse (who happens to be the same horse from Hot to Trot), did you realize who the dude who transports his eyes into animal eyes was?????

Saddest Mome
In the last three episodes -- THE LAST THREE EPISODES -- there has been no "N for Nudity" thingie at the beginning of the show! It's to the point where my wife muttered, "I don't even wanna watch this anymore," at the beginning of last week's ep. Now, I don't know if the folks at HBO are trying to legitimize the show or something, but come onnnnnnnnnn. Also, I'm no mathematician, but there was DEFINITELY nudity during the scene where that guy got to have sex with three prostitutes!

And that guy clearly has a wonder-dick, right? Or has some sort of magic powers? OH MY GOD WHO CARES?

And then there was the lady who did the crab walk and showed everybody her vagina. That got me thinking, is that even attractive? I mean, if a woman did a crab walk toward me and showed me her vagina, would I want to have sex with her in crab walk position? The answer is yes. The answer is obviously yes. Of course it's yes. Absolutely. What? Yes. I want to have crab walk sex. I feel like I would be really good at it. I feel like it's the only thing that I would be legitimately good at.


Mome Where I Had to Pause the Show and Ask My Wife Questions Because I Get Confused About Stuff
So hold up, the eunuch guy locked a wizard in a box? And now he's gonna get revenge on him by keeping him in that box and feeding him carrots??? And that's how you spell "eunuch"?!?!?

Can We Please Talk About Jamie Lannister Now???
Chop suey!

Holey moley. Sad that he got chopped, but how amazing was it that they hung his hand around his neck. That's pretty demoralizing. I kinda wanted him to eat his own hand.

Unpopular Opinion Alert
Quick segue about this whole BOSTON STRONG stuff. Look, the events that took place in Boston were obviously tragic. Horrible. Sad. Ridiculous. But enough of this YOU MESS WITH BOSTON, WE'RE GONNA GET YOU stuff. I mean, shut uppppppppp. This has nothing to do with Boston. This has nothing to do with HOW STRONG BOSTON IS. This has to do with two buttheads who committed a heinous act that just so happened to take place in Boston. If this occurred in Des Moines, Iowa, or Snellville, Georgia, or Kings mothafuckin Landing, people would've worked just as hard to apprehend the suspects and figure stuff out. So enough with the Facebook candles and the Boston Strong and all that bullisht, Boston is a fine place, filled with nice people and dickheads and buttfaces, just like every other place in the world. Sorry. I love clam chowder.

This Week's Mome That Reminds Me That I Would Not Survive One Day in Game of Fronesville
There's so much mud everywhere!

I went to a John Legend concert last week (it was outdoors and the tickets were free, okay?) and the entire place where the concert took place was COVERED in mud. Especially the hot dog tent. I was tip-toeing around that jawn trying not to get my precious new Vans dirty (because there is NOTHING in this world worse than getting your new sneaks dirty) and you know what? They got dirty! And I was crabby all night long. That's not even true, Jon Legend's sweet voice calmed me down, but still. Too much mud! Too much mud! Too much mud!

Oh My God Is There Anything Else I Need to Talk About?
Yes!

Let's have a boob off! 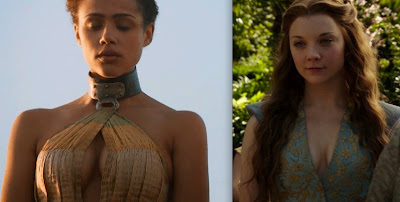 Whose Boobs Do You Prefer???

(Evster's note: These polls are the fucking worst. They never work. But thank you for trying. I love you.)

Did you know John Legj went to Penn??? It's true and WHO CARESSSSS??? Speaking of who cares, I think I'm gonna take some reader questions and answer them in a post soon. It seems like that's something to do, right? I did it once and it was a moderate success. So send in your questions to TVMyWifeWatches@gmail.com and I promise to answer every single one in a post. YEP. EVERY SINGLE ONE. EVEN IF THEY'RE DUMB. AND THEY'RE OBVIOUSLY GONNA BE DUMB. GOD I HOPE SOMEONE EMAILS ME. Oh my God who cares??? Just check out this ridiculous lava lake in the Congo. That's what I'd do.