The Bachelor: I'm Tired of Writing About This Show


Look, after four hours of watching the Bach this week, writing one recap here on Tuesday, another for Zoo With Roy on Wednesday, and now another right now, I am Bach'd out. I AM BACH'D OUT. No mas. Can't write one more word, can't think about it for one more second -- so instead of trying to entertain you with jokes jokes jokes, 'cause I'm Mr. Jokeman and I love to tell jokes!, here are a bunch of pictures that sort of have to do with the show, but maybe not, honestly none of this matters, let's get to it.


This is Banff National Park, where Sean took the ladies. It's fucking beautiful. My parents took me there when I was a teenager and my father almost got eaten by a bear. We were driving down the road and saw a bear, so my dad pulled over to take his picture. Then all these other tourists starting pulling over, too. Pretty soon, there were like 50 goddamn people standing at the side of the road clicking their cameras like paparazzi. The bear was just chillin', eaten some berries, looking like a bear. So my dad (who also looks like a bear) starts creepin' closer and closer to the bear to get a better shot. And every goddamn tourist follows him, thinking, "Yeah, that's a good idea, we should all get closer to the bear, this guy knows what he's doin! He's hairy as shit!" Eventually, the bear was like, "Dude, step," and gave my dad one little Kevin McHale pump fake and then he and all the tourists ran away screaming and one guy fell down and broke his camera. Or at least that's how my mother tells the story. I don't really remember it happening, because I spent pretty much the entire vacation chillin' in the backseat of our rental car playing with my balls. This is the kinda post it's gonna be, folks. Buckle up.


This is Philadelphia, where I live now. This is fucking bullshit.

This is a goddamn goat. On this week's ep, the ladies had to milk goats and then drink goat milk. One lady guzzled it down LIKE A GOAT and then let the milk dribble all down her chin. It was the fucking most awesome thing that has ever happened on this show.

This is Catherine. She's Zoo With Roy's favourite. I think she's a total idiot. This week, she told some story about how her best friend growing up got killed when a tree fell on her. Like, a tree actually fell on her and killed her! That part was sad, but then she went on to talk about how this tragedy made her realize that you can't go one day in this world without living life to the fullest, blah blah blibbity blah. Catherine doesn't know shit about shit.


This is a dude riding bikes with his two daughters on vacation in Martha's Vineyard, which is some place that really rich people go to ride bikes. It might be a cool place to visit, but I can't imagine that it is. I'm bringing it up because my dental hygienist once referred to it as "her soul space." I didn't know what the fuck she was talking about then, and I still don't now. Anyway, AshLee said this week that she's really making a "soul connection" with Sean, which was the stupidest thing any person has ever said when not giving a power point presentashe. AshLee is currently last in my power rankings and this reminds me that I need to make a dentist appointment. 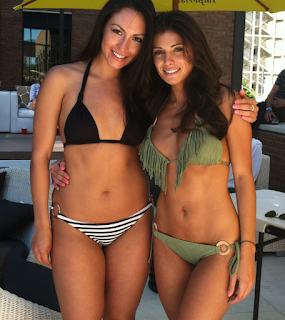 This is Selma (and some other chick who is not Selma, but who is probably a very nice lady). I'm sorry if you're looking at this at work and I failed to give you a heads up, but then again, this is the week where I don't give a shit. This is also the week when Selma brought shame to her family because she kissed Sean on national television -- a kiss that just so happened to be the lamest, sorriest, shaftiest kiss ever. If you're gonna go out Selms, at least make it worth our while. She was the most disappointing contestant they've ever had on this show and I love her more than anything and I already miss her and she was also kinda boring as shit.

This is a good song, though.

My friend Rart recently told me that he has stopped reading TVMWW and now only skims it and looks at the pictures. So in honor of Rart being a total dickwad, I'm going to use this space down here to leave him secret messages until he realizes. Here we go: Hey Rart, SUCK MY BUTTTTTTTTTTT.

Email ThisBlogThis!Share to TwitterShare to FacebookShare to Pinterest
Labels: The Bachelor, The Bachelor: Sean