"From the state where Jerry Sandusky rapes children and people from Pittsburgh take shits on their own lawn, I'm The Evster, Miss Pennsylvania!"

Pretty fun game. Pretending you're introducing yourself as a contestant in the Miss America pagj. My wife and I played that game for approximately two hours before Saturday night's show. Just walking around the house, eating cereal, not really engaging in conversation, just repeatedly coming up with different openings for different states ... probably the most enjoyable two hours of my week.

"Where the power of Niagara Falls is equaled only by my husband's diarrhea, I'm Darrie Dar-Dar, Miss New York!"

"From the winter home of Kim Richards after she checks into some super-relaxing spa-like rehab center, I'm Jennifer Flarvenstein, Missssssss Arizona!"

Anyway, you get the point. So while you were out on Saturday night "having fun" and "banging dudes," I was at home with my wife watching Miss New York bring it home for Jerome.

It's become an annual tradition in our house. Every year (yeah Ev, we know what annual means) my wife and I put on our most comfortable sweatpants (mine are maroon!) and watch America's sweethearts duke it out. The show is normally very exciting -- there are so many butts! -- but this year's was actually quite boring.

It still had plenty of moments worth discussing on a blorg that will probably just be skimmed by 98% of its readers. So without further Freddy Adu (pretty sure I've used that line before), let's get to know this week's Wednesday Wifey: Mallory Hagan, Miss America 2013!!! 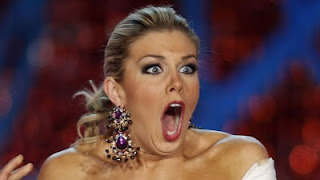 Here's a picture of Mallory singing an aria from the Italian opera, "La Vidalucci Consuela" (The Life of Concillerience). The performance was actually quite good -- very passionate, emotional, and she really blew the judges away with her sophistication and vocal control. 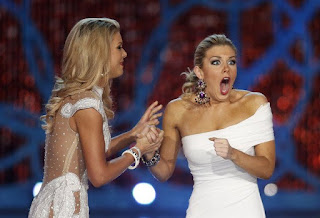 THAT'S NOT EVEN A WORD.

She was just freaking out because that's what chicks do when they win Miss America. Normally when the winner is announced (you know what happens) Miss America immediately breaks down and gets a big, fake hug from the loser. But Mallory's not your typical Miss America. She's from New Yawk, and she don't hang out wit no losers. So after hearing her name called, Mallory did a quick spin away from the runner up, opened her mouth wider than any hungry hungry hippo, and screamed like a beautiful, wet goat. 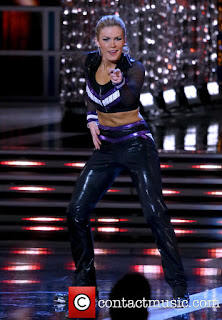 For the talent portion of the show, Mallory did a tap dance to a James Brown song. It was really, really, somethin'. At one point, she jumped really high in the air like a beautiful, wet goat. 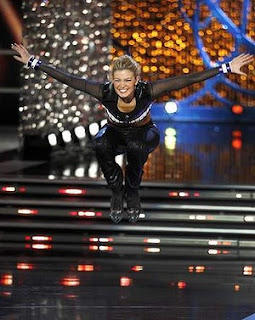 (Do goats even "bahhh?" What noise do goats make? She looks nothing like a goat.) 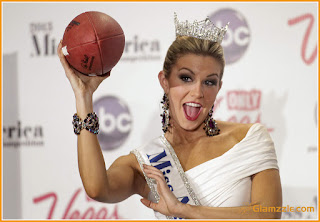 Pretty decent throwing motion from Miss Mallory. Much better than Rosie's from the Real Housewives of New Jerz. 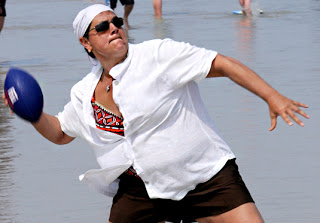 Gotta love how Mallory's got her fingers on the laces and her elbow in. (Is "elbow in" even an important aspect of throwing a football? I just held up my arm at my desk and tried to simulate throwing a football with my water bottle and my elbow was pretty far out. I also have a fucking perfect throwing motion, I'm like a drunk Jeff George.)

Turns out, Miss New Yawk was actually raised in Alzabamaz (hence why she knows how to throw a football) and only moved to NYC a few years ago. She now lives in Brooklyn and goes to the Fashion Institute of Technology. I know this because I did research! This blog ain't no joke! And this blog game ain't no game! You know what I mean!

Whenever my wife and I have a catch, Dar refuses to put her fingers over the laces because she claims, "It doesn't do anything." This is a perfect metaphor for her entire life -- without a doubt the most uncoachable person I've ever met.

"From the state where my wife refuses to do anything anyone ever tells her to do, I'm The Evster, Missss Pennsylvorniorn." 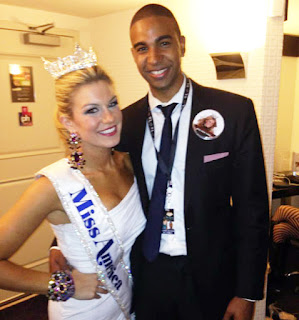 This is Mallory's boyfriend. He seems like a nice enough guy, he's tall, he's got a decent haircut, probably gets his clothes dry cleaned. But see those striped stockings and boots just behind him on the right hand side of the picture? Is that a stripper? Is that a stripper backstage at Miss America? And if so, how hot is that stripper?!?!? And how is it possible that a woman's KNEES can get me this excited??? 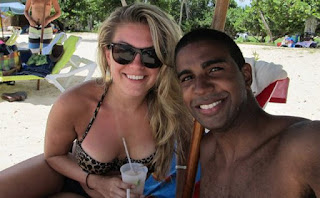 I had a roommate in college named Cornelius Watson III and he once told me, "Don't ever trust a white dude with a mustache, or a black dude without one."

Also, peep that dude in the background (back left), hairiest treasure trail I've ever seen. 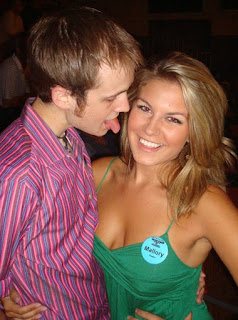 Gotta give it to this dude, he's really goin' for it. Mallory seems unfazed. She also seems to be 14 in this picture (which I consider to be the perfect age for a woman).

"From the state where bloggers make jokes about how hot 14-year-olds are, I'm Tanya Torbs, Misssss Pennsylvorvstein." 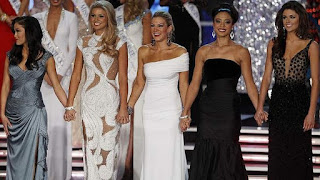 Of course, Mallory had some stiff competish. Above are the final 5, from left to right:

Miss Oklahoma: she was some sort of light-skinned, half-white/half-Phillipino lookin' chick who had a butt that reminded me of a hot turkey sandwich (that's a good thing). I liked her a lot. She finished third.

I HAD NO IDEA THERE WERE BLACK PEOPLE IN IOWA.

Mariah (Cary! It's still unbelievable!) did a step routine to that song, "The Scatman" which was by far the highlight of the evening. The only other notes I jotted down about her were, "Really nice tits. Poss the nicest," which is a pretty nice compliment. Poss the nicest. She finished in 5th, obvs.

Miss Wyoming: Two amazing things about this lady: 1) She wore one of those bikini bottoms that has the tie straps on the hips which are BY FAR the hottest way to keep a bathing suit on a woman's hips. 2) She grew up showing goats. I DON'T KNOW WHAT THAT MEANS, BUT IT SOUNDS AMAZING. Miss Wyomes finished in 4th. 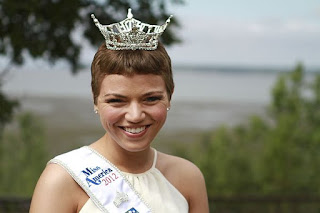 This was Miss Alaska, who I thought was goin' for the Northern Exposure look, but actually shaved her head for cancer awareness which I guess is a good thing but won't win you any major competitions I mean c'mon. 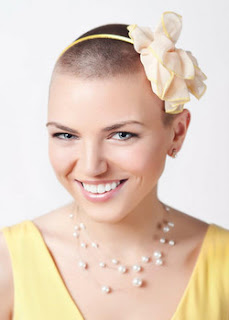 Here's another picture of Miss Alaska -- I mean, she looks cute enough -- but honestly get over yourself lady nobody's curing cancer I mean come onnnnnn. 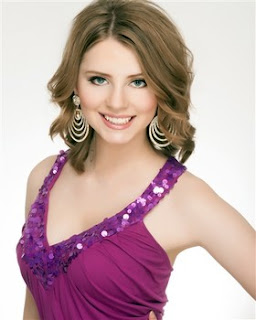 This is Miss Montana, who pretty much looks exactly like a Miss Montana should: confused, heavily medicated, skin whiter than milk of magnesia. She also had a speech impediment.

Turns out, she has Autism!

Which I felt horrible about.

But c'mon, this country is NOT ready for a Miss America with autism. 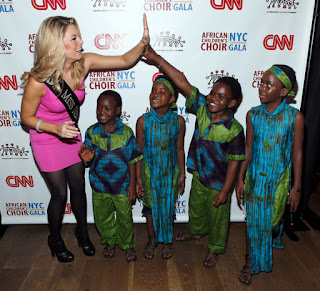 Miss America needs to have social skills! and Mallory clearly has them. Here she is high-fiving some African kids (or black people dressed up in African garb). Who can really tell these days?

If I were to rank these kids in cuteness, I'm going left to right exactly how they're standing. I mean, look at the little guy on the left! He's so ready for a high five!

How amazing would it be to watch these kids do the Scatman???

"From the state where bloggers manage to offend pretty much every type of person in one blogpost and you still support them by reading their posts, I'm The Evster, Miss T.V.Emm.Dubbayoo.Dubbayooooo!"

I cannot believe that I missed the real Miss America (Mariah Carey) on American Idol last night. But I have a good excuse! I went to see Louis C.K. do stand up and it was PHENORMINAL. He's on tour for a little bit -- tix are prolly sold out, but you can check his tour dates here. Orrrrrrrrrrrr, you can look at this totally bonkers turkey sando.