Before last Sundee's Boob Convention, I was definitely aware of Kat Dennings. I'd seen her in 40 Year-Old Virj, I thought she was on Big Love (she wasn't) and I had a general idea that she was a person. Now, after spending the last half-hour doing some internet sniffing, I know pretty much everything about her. I've done more research on Kat (30 mins worth!) than I've done on anything ever for TV Me Weef Wooches -- so get ready for some bigtime insider knowledge. First piece of bigtime insider knowledge: Acme currently has a sale on cantaloupes. They're 88 cents a pound. They're really nice cantaloupes, too. Some of the cantaloupes are filled with milk. Antelope milk. I'm sorry. I'm sorry you have to read this.

Did you know that an antelope can weigh up to 450lbs??? That's not true. That's not even close to true. Let's get back to Kat.

Turns out, Kat was born and raised in Bryn Mawr, Pennsylvaniorb, a ritzy suburb of Philadelphia. The town is best known for being the home of the uber-liberal Bryn Mawr College -- an all-female school where every other chick looks exactly like Tony Danza. Here's a picture of a Bryn Mawr student:

Don't get me wrong, looks like a nice day to throw a frisbee around -- and who knows, maybe this girl really likes frisbee -- but a wrist brace? C'mon, Tony Danza Jr. And why is she holding another frisbee in her right hand? Is she having a toss with like nine other co-eds? I hope she's chucking these frisbees to one of those dogs who jumps off peoples' backs and stuff. How amazing are those dogs??? But I imagine she's just tossing them to another girl who has no idea how to condition her hair. And what's up with that little kid in all-black behind her? Is he trying to french kiss his grandfather? 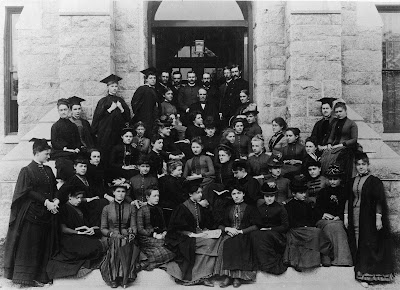 Here's some more ladies who went to Bryn Mawr. Forget about the fact that this is probably the most homely-looking group of women to ever be assembled ... did the cameraman even bother to tell them that they were being photographed???

Half of these ladies are looking off in la-la land, some are facing the completely wrong direction and others are pretending to read books. One (first row all the way on the left) is actually IMMERSED in her novel. She's not just pretending to read, like, "Okay ladies, I want some of you to act like you're studying," no, she's actually LOCKED IN to Dostoevsky. There's a very good chance that if you went to that building right now -- 80 years after this picture was taken -- you'd find that lady's corpse with a copy of Crime and Punishment on her lap.

If you can't see that isht, you can click on the pic for a bigger image. 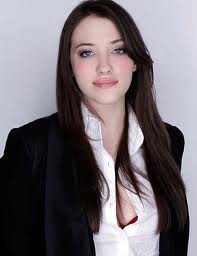 Back to Kat! No idea why I just spent two paragraphs talking about women who are getting their Masters in Social Work. Unfortunately, when you google Kat Dennings at work, pretty much every picture of her is slutted up to the max. I guess that's actually a great thing, but I work in a cubicle and for the last hour I've been sitting up with my shoulders raised trying to block my computer monitor from my co-workers and now I'm pretty sure that I have scoliosis.

That being said, this is a pretty sultry pic even though Kat's just showing off a litttttttle bit of that red bra ... which is really all we guys need. God, we are such suckers. All girls have to do to turn us on is show off a hint of bra strap, a panty tag, a wrist watch tan, an ankle, a hair flip, post-it notes with little flowers on 'em, a piece of chicken that hasn't been eaten, a spread eagle shaved beave, a mountain dew bottle sticking out of their buttcrack, a can of mandarin oranges, an antelope eating a Ritz cracker, anything ... and we're done. 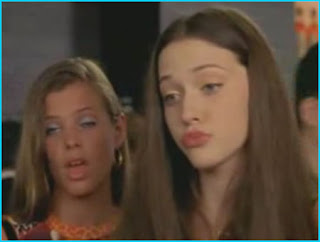 Once again, no idea what I'm talking about. 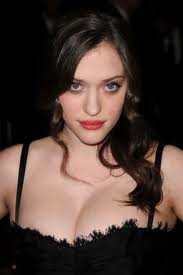 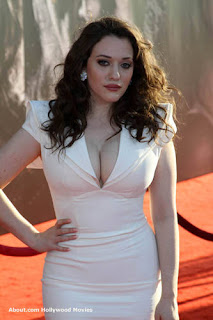 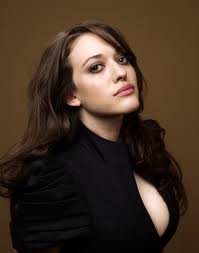 We've got a sidewinder! 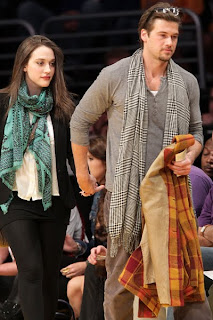 Kat is now dating this guy. He's wearing a scarf. So is she. I guess that's nice for them.

Kat and Scarf Guy work together on the same TV show, Two Broke Girls. I can't stand it when actors say they "work" on stuff. Like at awards shows when they're like, "Ohhhh, I'm Jane Fonda, look at me. It was such a pleasure to work with Robert Dorbingstorm. He's such a brilliant director. Cantaloupes are 79 cents a pound at Shop Rite." GET OVER YOURSELF, FONDA. SHOP RITE'S PRODUCE PALES IN COMPARISON TO ACME'S. PLUS I'M MORE OF A HONEYDEW MAN ANYWAY. 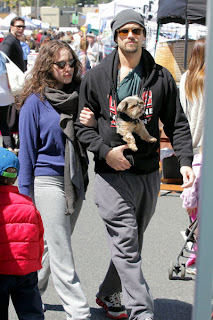 I don't know if that's Scarf Guy's dog or Kat's dog -- but that guy has a dog hanging around his neck. And I'm not here to rip on Scarf Guy! Let me make that abundantly clear! He might be a very nice guy! And I fully fully fully support this couple wearing sweatpants in public. But those are straight-up sweatpants -- and normally when a guy wears straight-up sweatpants you can totally see his dork through his pants, so I'm guessing this guy has a small dork. Also, he's carrying a dog around his neck. 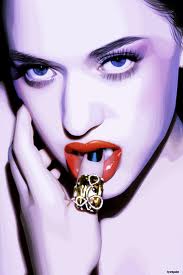 That guy from Sex and the City who knocked up the red-headed lesbian was such a goober! Why would they cast that guy?! Did you see that episode when he tried to make a half-court shot at the Knicks game? It was like he had never held a basketball before! I've never seen a woman bite her thumb with more intensity than Kat! Sometimes when I get fruit salad I don't even touch the cantaloupes! I love a good kiwi though! 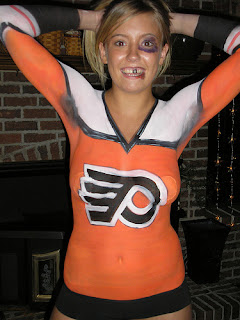 This is what actual women from Philadelphia look like. 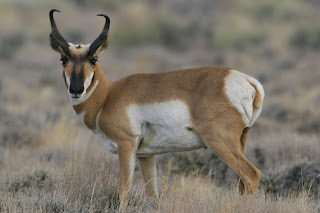 Stop staring at me, antaloupe!

I don't know what's happening to this blorg. Each post is filled with more and more dogisht. I don't even think Acme has good produce, why would I say they have good produce? Here's a picture of a cat eating some melon.