Wednesday's Wifey: Tabatha from That Show Where She Yells At People Who Aren't As Good At Cutting Hair As She Is


Watched my first-ever episode of Tabatha Takes Over last night and I gotta tell ya ... IT'S NOT A BAD SHOW.

For those of you who don't watch Bravo during NCAA Championship Week, Tabatha Takes Over is a pretty standard reality show: A salon guru (Tab) barges into an unsuspecting salon, yells at a bunch of people and eventually turns that shit-salon into a slightly less shittier salon.

Last night she took over a salon owned by 84-year-old Dr. Flavio, who wore a back-brace throughout the entire episode. I friggin' loved that guy.

But during Wednesday's Wifey here at TV Me Weef Woapches, I don't just give you a recap of some standard reality show, I try to bring you insider informashe that you can't get anywhere else (while also giving you extensive boner commentary). So without further Freddy Adu ... let's dig deeper into Tabatha Coffey (#77 on the Penguins?), this week's Wednesday Wifey. 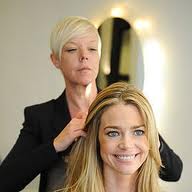 Look how absolutely ecstatic Denise Richards is to have her hair cut by the blonde bomber. I've seriously never seen a happier look on a human being's face. The other night, I ate Doritos, and yet I still wasn't quite as happy as Denise is here. I'm happy for you, Denise, I really am. Also, when I write the name "Denise" I think of Denise from the Cosby Show (who's also been known to induce a couple bone-jobs in her day). 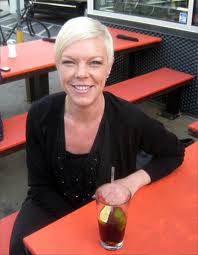 I like how even though Tabatha is a big-time Hollywood hair-chopping lez-bot, she's not afraid to chill outside at some BBQ shack in western Alabama. For the rec, there is NOWHERE I enjoy eating more than at places like this. I'm also sorry for calling Tabatha a lez-bot, her lesbian-ness should have nothing to do with her haircutting abilities or taste in al fresco dining. 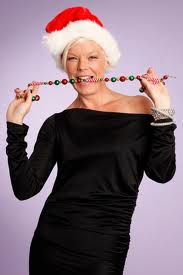 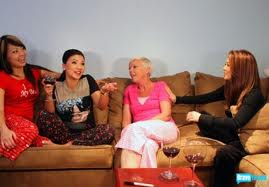 AND THEY'RE WEARING PAJAMAS, AREN'T THEY?!?!

WHERE ARE THE DORITOS???

I WANT THEM TO GET ORANGE NACHO CHEESE ALL OVER THEIR FINGERS AND THEN WHAT WILL THEY DO??!!?!? 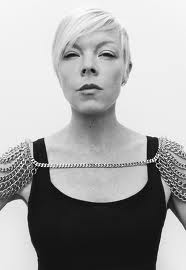 So apparently Tabber's into medieval chain-armor? I can't believe how much I like this lady. She's like 55 years old, right? 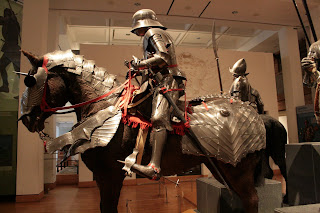 Without a doubt the first place I go when visiting any and all art museums. Look at that horsey's armor! Also, is that Dark Helmet riding Smarty Jones? I think it might be. 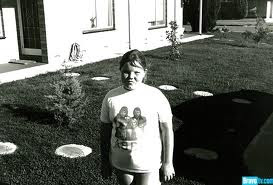 The first chink in Tabatha's armor -- she used to be a fat chick (WHICH IS COOL WITH ME BY THE WAY, I LIKE FAT PEOPLE AND FEEL LIKE THERE'S NOTHING WRONG WITH BEING FAT AND I SUPPORT YOU TABATHA REGARDLESS OF YOUR WEIGHT).
And I really can't tell (I've tried to blow up the picture), but I sorta think that might be SWV on her t-shirt (who are probably my favorite female recording group of all time). Although, that might be Alabama or something -- which would explain Tabatha's love of eating outdoor BBQ. 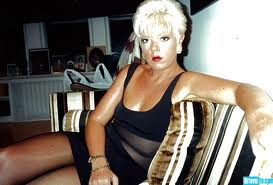 BOOM SHAKALAKA!
90's Tabatha is a spitting image for what I wish my mother's friend Marion looked like.
Oh nothin', just hanging out here at my shore house in my killer black dress and nylons WHILE STARING AT THE CAMERA LIKE A STONE COLD LEZ-BOT! 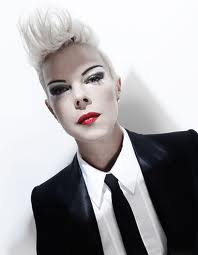 This is EXACTLY the image I was goin' for when I was in my mid-20's. I'm professional, I wear vests and I am ready, willing and able to eat A LOT of beaver. 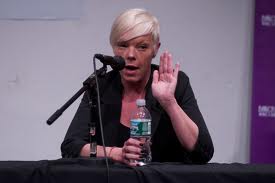 "Now listen, let me just explain why bottled water is SO important to the hairstyling industry. And not just any water, Poland Spring. That's my water of choice. Straight from the springs of Poland. I SWEAR by Poland Spring. Next question." 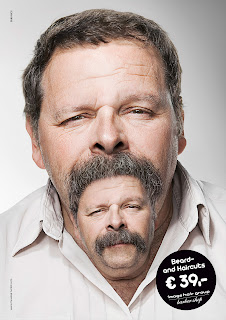 Tab's next takeover?
Have I mentioned that my friend Sergio opened a men's hair salon called I'm Sergio? For realz. Check him out applying paste to his hair here.  Orrrrrrrrrrrrrrr, look at these horsies in Mongolia.