Prepare for a new era of TV My Wife Watches!

With the Bach in our rearview mirror, it's time to start blogging about breasts and butts from respectable, dramatic television programs. Mad Men returns this Sunday, back on the air for the first time since October, 2010. It's been so long that I honestly can't remember what was going on in this show. Did Don Drapes marry his secretary? Did Joan have an aborsh? Is Cooper dead? I kind of remember him dying. I honestly have no idea. But I do know that seventeen months is way too long to have to wait for Christina Hendricks to be Wednesday's Wifey. I also know that my head almost exploded while googling pictures to use for this post.

Let's see what this lady is all aboot ... shout-out to Canada ... she's not from Canada. 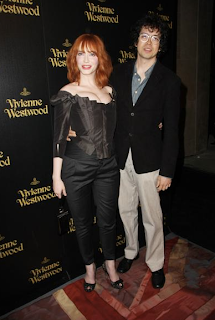 Here's X-tina standing with a man who looks to have no idea how to act, dress or fit into modern-day society. According to Wikipedia, this man is her husband, but that can't possibly be true. I think this guy is a famous cellist. Or possibly a monkey-man. 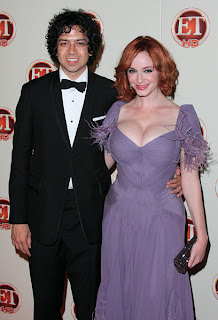 Monkey-man looks a little more put together here, it's nice that they dressed him up in a tuxed-JESUS CHRIST ... IT'S LIKE THEY'RE EXPLODING OUT OF HER DRESS! Why would AMC keep this show off the air for SEVENTEEN months?!?!

I admit that I don't know a lot about human (or monkey) anatomies, BUT HER BOOBS ARE GOING TO EXPLODE!

I HOPE MONKEY-MAN DOESN'T GET HURT! 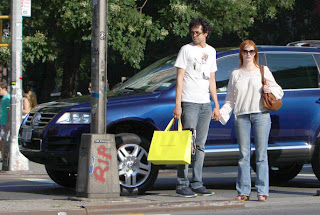 Monkey-men are really good at carrying things, like bananas or banana-colored bags of enormous bras that their monkey-handlers ask them to carry. It's nice that Christina is holding her monkey-man's hand so he doesn't get scared. Sometimes monkey-men get scared. I want to watch Christina give birth to a baby. 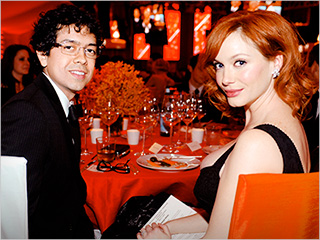 Looks like a totally normal picture. Just a lady and a monkey-man enjoying a wedding reception. But if you look closely at Christina -- specifically her exploding boobs -- you'll see THAT HER BOOBS ARE GOING TO EXPLODE! 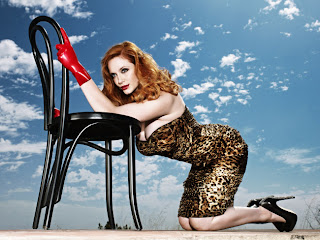 I WANT HER TO JAM THOSE RED LEATHER GLOVES IN MY MOUTH, BASH THAT CHAIR IN MY FACE, AND MAKE ME DRINK OUT OF HER SHOES. 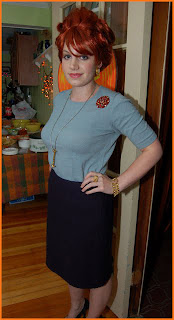 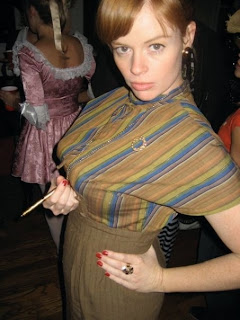 This lady is making a slightly less-weird face, but is VERY aggressive. Also, that woman behind her (in the pink dress), take a look, her back kind-of looks like her front! 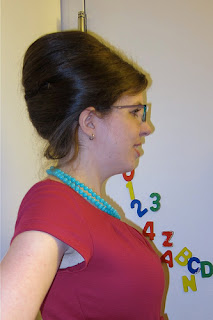 This lady has her own blog -- Polka Dot Overload -- where she tells people how to dress up like Joan.

THIS IS A REAL PERSON! 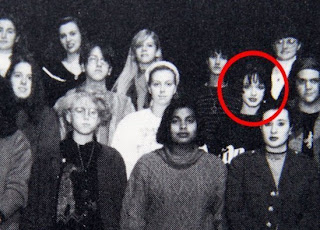 Here's a photo from Christina's high school yearbook. Apparently teenagers aren't allowed to smile. I can't stop staring at the blonde dude in the front row, all the way on the left. Look at his sweater ... THAT'S A DOGGIE I THINK ... AND I ALSO THINK "HE" MIGHT BE A "SHE" ... now I feel bad. 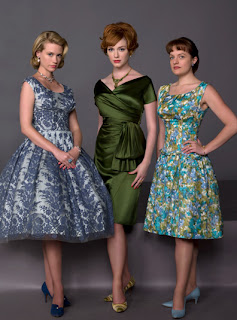 Those are really nice dresses and really nice shoes.
I know that because I have my finger on the pulse of women's fashion.
I also once sold women's shoes during one summer in college. It was secretly amazing.
Mad Men starts this Sundee night with a TWO HOUR PREMIERE. If you forget what the people of Sterling Cooper Draper Price are up to, I recommend going back and reading all of my Mad Men posts from last seez, found here. Orrrrrrrrrrrrrrrrrrrrrrrrr, check out these sneaks that I almost bought today ... don't tell my wife!