Wednesday's (not yet) Wifey: Lena Dunham from HBO's Girls


Saw a brilliant movie the other day. Like a truly brilliant movie. And not "brilliant" in the way that British people often diminish the word, like:

"Hey, I got some saltines."

"Oh, cool. Did you get the low-salt ones, or the regular ones?"

"Hey, I saw this brilliant movie the other day. Yeah, it was so well-written and the dialogue was so natural that I realized that I have no chance of ever becoming a writer. I mean, what's the point when there's people out there who are so much smarter and more creative than I am? I'm actually thinking of ending this blog immediately. I also might kill myself."

The movie's called Tiny Furniture, a black comedy written, directed and starring Lena Dunham, this week's Wednesday (not yet) Wifey. If you haven't heard of Lena Dunham, you will soon. Because besides making an absolutely brilliant movie and sucking my confidence dry, her new show Girls premieres on HBO this April 15th.

Let's look at some pictures of Lena and learn more about the heroine who could finally put this dogshit blog to rest. 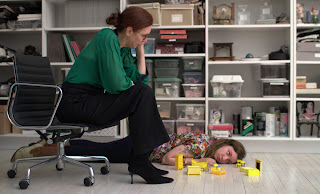 Tiny Furniture is one of those movies where nothing really happens. It's a subtle, dialogue-driven, hilarious, sad, subtle, dark, heartwarming, depressing, subtle, wonderful film. It's just like Passover seder at my mother's house, except Passover lacks the whole subtle, hilarious, heartwarming, wonderful part. Last year, my father ate four pieces of gefilte fish and then shit his pants. 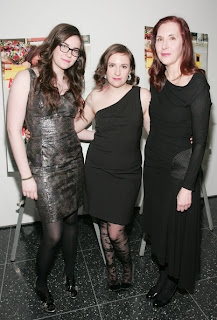 Lena cast her real-life mother and sister as her mother and sister in the movie. Her mom is kind of an Angelica Houston/Ethel Tenenbaum-type. Her sister is very tall and very talented. My mother hasn't stopped talking since 1974. My brother has heard of Houston. 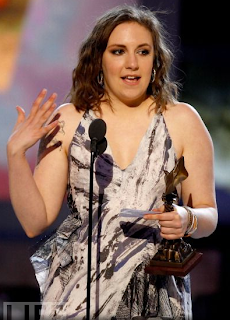 Tiny Furns won the best narrative feature at South by Southwest in 2010 and is now part of the Criterion Collection which means that it's right up there with Air Bud. Lena was 23 when she made the film. When I was 23, my biggest accomplishment was making the playoffs in Madden with Chris Wienke as my starting quarterback (Carolina). We went 10-6 and earned a wildcard berth. This remains my proudest accomplishment to date, closely followed by the time that I almost read an entire paragraph without moving my lips. Third was sitting on the subway next to a guy who didn't have any feet. 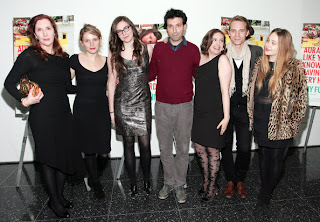 Here's the cast of Tiny Furniture, all regular-looking people, except for that one lady second from the left who kinda looks like Claire Danes. My friend Feddd looks like Bob Saget. Lena's mom is also holding her clutch EGGS-ZACT-LY the way that you're supposed to hold a football. I am so embarrassed that I just called a pocketbook a clutch. 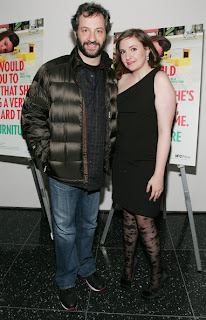 When you make some noise at South by Southwest, people like Judd Apatow get excited. And when people like Judd Apatow get excited, they ask you to collaborate on a project for HBO. Last week, my friend Loaves asked me to collaborate with him on a screenplay. It's about a guy who doesn't have feet. It's called Foot Man (thinking of reworking the title). 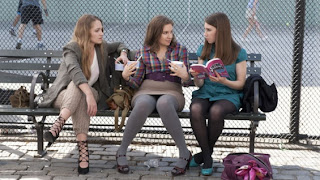 This is a screenshot from Girls, Lena's and Judd Apatow's new show on HBO. It's supposed to be sort of like Sex and the City, but without all the annoying stuff that made Sex and the City the worst show in the history of television. So basically it's nothing like Sex and the City. It's about some 20-something chicks in New York City who are trying to figure stuff out and have sex and eat sandwiches. I would stab Miranda if I ever saw her. 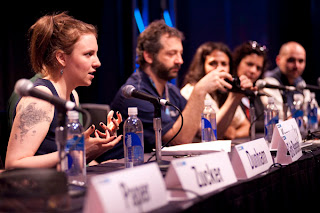 Now that Lena's famous, she gets to be on panels where she talks to people about stuff. See those table-tents in front of her with people's names on them? Yeah, some person had to make those. I know this because I used to have to make those. People get angry when you spell their name wrong.

I don't know if I made it clear enough that this movie is absolute genius. It gets the TV My Wife Watches Level 9 Stamp of Approval Stamp (limited edition). So watch the first scene of Tiny Furns below and decide for yourself. Or just check out this picture of a dog driving a car.

I call him Doggie Guy.

DVR ALERT: Tiny Furniture is on TONIGHT at 10:20pm on the Sundance channel. So tape that shit! Or watch it, it's not like there's anything else on at 10 o'clock. All right, all right, here's another picture of a dog driving a car.