Behind every great man is an even greater woman. And behind every quarterback who still sleeps with stuffed animals is a woman who probably makes him chicken nuggies every night for din-din. 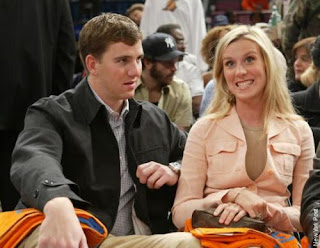 I've never seen two better-folded Knicks rally towels in my entire life. What must their home look like? Magazines fanned out at a 15 degree angle on the coffee table, brand new shell soap in the powder room, dixie cups to rinse with, khakis, lots of khakis.

And what about the dude behind them with the Wolf Man beard? What does HIS apartment look like? Chinese food containers strewn around the living room, a woman chained up in the basement, a bunch of herbal teas, bloody khakis, lots of bloody khakis. 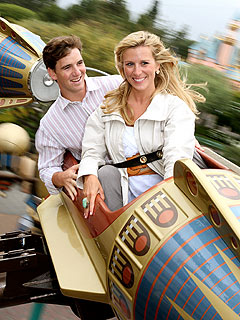 Interesting choice of attire for a day at the amusement park. I always thought cutoff shirts and shorts (with an extra pair of underwear in your cargo pockets) was standard operating proceej. I mean, how are they possibly gonna go on the log flume?!?!

And who is taking this picture?!?!

Is there a guy in the (ROCKET SHIP?) in front of them who undid his safety belt so he could turn around and snap this shot? You know what they say, "Great photographers go to great lengths for great photos."

Obviously no one says that, but for some reason I thought I heard someone say that once, so on a camping trip a few years ago with my buddy Parm, I kept saying that every time I bent down or crouched to take a picture. Parm then started saying it too, until he accidentally dropped his camera into a creek while trying to navigate some slippery rocks. My throwaway camera from the trip is still in my trunk (film was never developed) right next to some dirty socks and an old Hustler magazine. 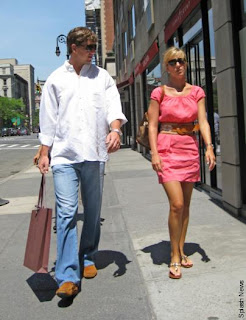 When your wife ruins her nice clothes on a log flume, she gets upset. And when she gets upset, you're forced to carry her shopping bag for her. Poor guy.

Also ladies, there is NOTHING WORSE than being forced to carry some dumb bag from some dumb place. A few weeks ago, I had to take my lunch to work in a Banana Republic bag (IT'S ALL WE HAD!) and had to withstand the longest subway ride of my life. I kept making eye contact with this terrifying (read: black) guy wearing a UNLV Starter jacket. The jacket was actually amazing.

Props to Eli for going untucked though, I didn't know he had it in him. 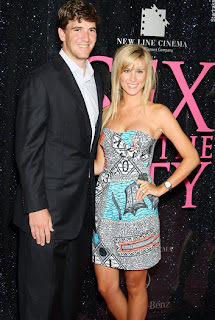 To make it up to your wife, sometimes you need to take her to the Sex and the City premiere. Smart move by Eli to keep his right hand locked and loaded in prime karate chopping position. 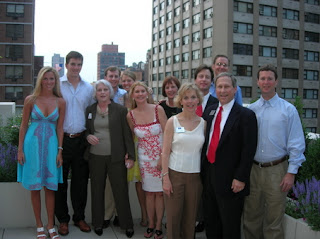 Lotttttttttttta tucked-in shirts and khakis at the McGrew family garden party. My wife's head would explode if she were forced to attend this ... that lady ABHORS khakis (and white people). 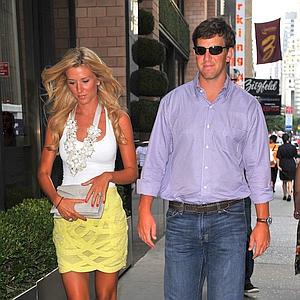 I feel kinda baaaaaad for ripping on Eli, because I kinda like the guy! He's an above average quarterback, could potentially win his second Super Bowl this weekend, and he's got a totally smoking hot wife who's into Knicks games, amusement parks, garden parties, manicures, yellow skirts, taking her husband's name, letting her husband wear jeans when they go out to dinner, shaving her underarms, dudes who definitely subscribe to Hustler ... 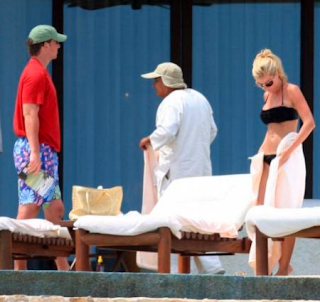 AND SHE'S COOL WITH ELI WEARING THOSE TRUNKS!

And how 'bout your boy in the hat with the earflaps?!!? Someone's gotta blow up this picture and tell me what book Eli is reading. Part of me thinks it might be Three Cups of Tea, but it also kinda looks like a Caddyshack DVD. 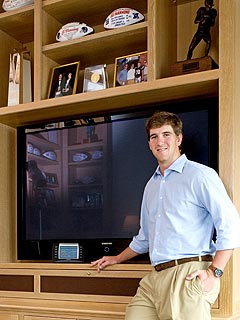 WHAT KINDA WAY IS THAT TO PUT YOUR HAND IN YOUR POCKET?!?!