This is the first-ever Readers' Choice edition of Wednesday's Wifey.

Earlier this morning, I asked followers on Faceblork and Twittles to send in their suggestions for today's Wifey. Moments after doing so, I got really really really nervous that no one would respond, so I sent a mass text to around twenty friends asking them to comment on Faceblork which would hopefully get the ball rollin' and at least make it look like some people actually read TV Me Weef Wooches.

The people I texted were very carefully selected, like my wife and my friend Thad who's really nice because he grew up on a farm. The rest of the chosen people were also really nice, the kind of people who bring over a box of Entenmann's cookies when they come over "just because." If I were to have asked my closest friends to help me out, I would've received a barrage of texts saying, "eat a dick."

By the way, is there ANYTHING WORSE than when you're involved in an email chain and you're really excited and you keep replying to all and then someone responds "unsubscribe" to your message? It's such a dick move. My friends are notorious for this. I honestly hate them. I wish I grew up on a farm (and had a bigger dick).

Those that did respond gave some really great suggestions, such as:

A few people (read: idiots) didn't really understand the purpose of my text (to get them to respond ON FACEBOOK) and texted me suggestions like Jelena Ristic part II, Selena Gomez and Jessica Rabbit.

Ultimately, I decided to go with Steffi Graf, suggested by @JesseFederman. 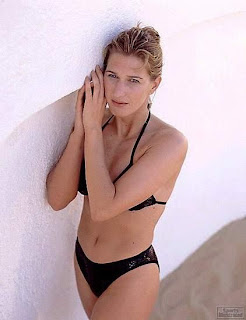 Steffi Graf is a great choice for Wednesday's Wifey because she's such an enigma -- no one has any idea if she's hot or not. At times it seems like she's not even close to attractive, and at other times (like pictured here listening to a wall) she looks amazing. 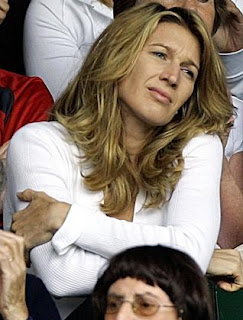 Another shot of Steffi sort-of looking beautiful (great layers in her hair!), but then again, also kinda ... whoa whoa whoa ... check out the dude? sitting in front of Steffi!

WHAT KIND OF HAIRCUT/GLASSES COMBO IS THAT?

That's seriously is the strangest looking upper half-of-a-head I've ever seen. A bowl-cut AND tinted glasses? I think that might be Salman Rushdie in disguise. What up Salman! 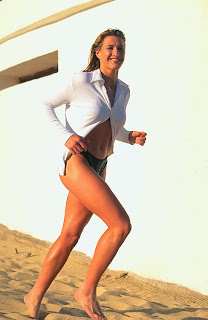 I mean for all intents and purposes this is a beautiful woman. She's so long! Based on just this picture alone, she would've gone in the late lottery of the 2001 NBA draft. You telling me the Super Sonics couldn't have used Steffi at small forward instead of Vladimir Radmanovic? Not disrespect to Vlad -- dude has a buttermilk jumpshot -- but you can't teach length! I SORT OF WANT TO LICK HER SHINS! 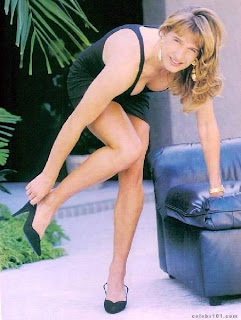 Again, seemingly pretty, nice cleave, totally hairless, but she doesn't even know how to put on a shoe!

STEFFI, THERE'S A PERFECTLY GOOD COUCH THERE (and it's leather!). HAVE A SEAT AND PUT YOUR SHOE ON PROPERLY. WHY WOULD YOU PUT YOUR SHOES ON STANDING UP? ESPECIALLY THOSE! 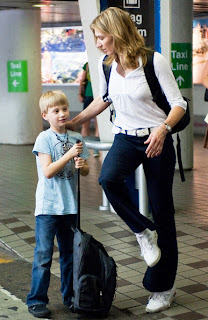 Steffi happens to suffer from a chronic case of Itchy Shin Syndrome, as shown here by her scratching her shin with the bottom of her sneaker (which is really the only way to scratch an itchy shin). But should a world class athlete like Mrs. Agassi really need to balance herself on her son?!?!? Such an enigma! 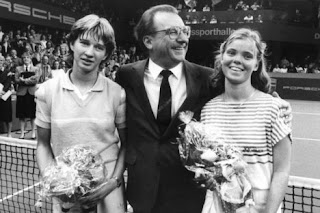 THIS GUY IS SO MUCH MORE EXCITED TO BE WITH THE GIRL ON THE RIGHT THAN WITH STEFFI (and you really can't blame him, can you?). Poor Steffi, definitely not her best look. Like a poor man's Detlef Schrempf. 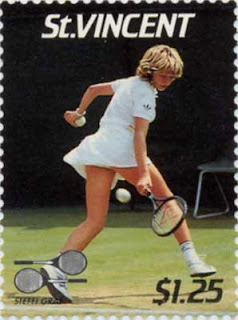 So it seems like the key to Steffi's hotness is: the more leg and butt she's showing, the more attractive she is. But that's probably true for most women (with the exception of Barbara "Baboon Butt" Jenkins who seriously has a baboon butt). And I don't know where St. Vincent is, but $1.25 seems a little steep for a stamp!!! 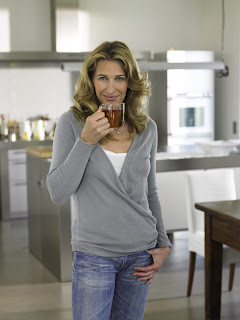 Such a sanitary kitchen! Where's the mail?!?! 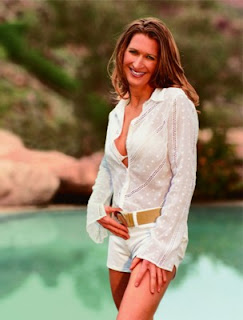 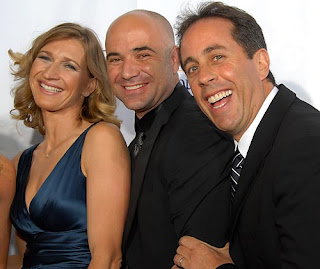 Seiny is so happy here!
And whose shoulder is to the right of Steffi's?!?!?

We'll never know!!!
I honestly have no idea if anyone reads this blog. My blogger sabermetrics are all facacta because I get 500 hits a day from people searching for pictures of Coco's cocos. Regardless, thanks so much for reading. Here's a group of amazing amazing amazing pictures.