Every year the start of football season brings an explosion of optimism, excitement, pizza, wings, naps, cheerleaders, sweatpants, and other sweatpants. But football season also brings with it neglected women and ruined relationships. In the fall, more and more married women become disenchanted with their good-for-nothing husbands even though those husbands manage fantasy teams with GREAT DEPTH at the flex position. Check out this pie-chart from a recent study published by the New York Times that I made during my lunch break work. 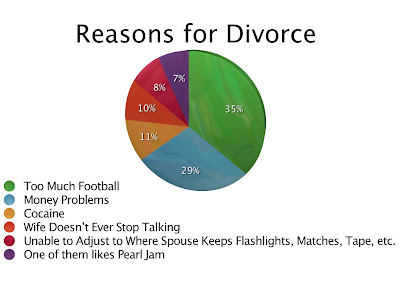 No one wants to break up with their girl die alone, so here are The Evster's Marital Tips for Football Seez.

Whether you're male, female or Bronson Arroyo, it is impossible to watch Michael Vick play football and not be blown away. At any moment while watching Vick, he has the potential to jump over a dude or throw a football through a guy's face. My wife could care less about football - she grew up in one of those households where riding a bike and cross country running were considered sports, you know, X games stuff - and she still finds Vick mesmerizing. The only entertainer more exciting than Vick is Cookie Monster. He eats so many cookies!

Ladies also find Vick to be very sexy, with his caramel smooth skin and pearly white teeth (they're seriously SO pearly). My friend Aubre actually saw him at a bar recently and claimed she instantly became, oh, how do you sayyyy, "moist?" Of course, this could also just be because Aubre is a VERY sweaty woman.

Now I know, I know ... I know EXACTLY what you're thinking ... yeah, yeah, Vick's completion percentage throughout his career has been a little low ... and yes, it's true, his little brother Marcus did have some legal troubles back at Virginia Tech ... but c'mon, give the guy a break!

Draft a Fantasy Team That Your Wife Will Support

It's extremely hard to rationalize to your wife why you're watching the 4th quarter of a Jaguars-Titans blowout. You can't just tell her that you have MJD in a PPR league and Luke McCown aka Checkdown Charlie is "dumping it off like CRAZY!" Which is why I chose Chris Johnson, or as my wife calls him,  "The guy who wore that outfit to the ESPY's! With the grill in his teeth! Mr. Grilly!"

See, my wife doesn't care that Matt Ryan has crazy weapons or that Rex Grossman was just named the starter in Washington, but she'll sure as hell watch Michael Oher pass-block for three hours just to get a three second glimpse of the Tuohys in the crowd. Which is why I took Joe B*tch A** Flacco in the 9th round. Also, Flacco went to Delaware and my wife has a friend from Delaware (shout-out to Basha!) and also the guy's name is "FLACCO" for God's sake. Here are the other players I snagged, while keeping my wife's thoughts in mind during each selection. 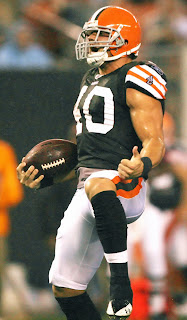 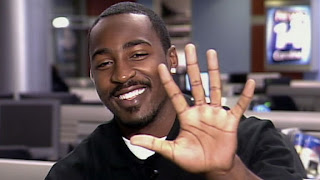 Hakeem Nicks - The Guy with Really Big Hands ... like Waffles! 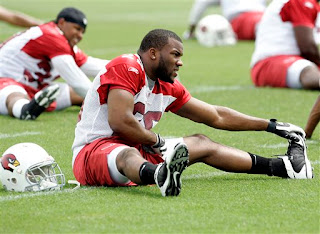 Beanie Wells - His name is Beanie! 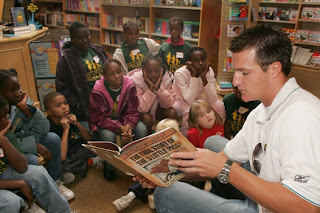 Josh Scobee - His name is Scobee! ... and Josh!
I got a friend who took a backup running back just because his ex-girlfriend (who broke his heart) has the same first name as the running back. My buddy thought that maybe, MAYBE, this would somehow help him get her back. He also took the Dolphins defense because he likes dolphins.

Do not - UNDER ANY CIRCUMSTANCES - take Big Ben. This will ruin not only your next 17 weeks, but possibly your entire life. There was one time - ONE TIME - when I HINTED that mayyyyybe that girl was "up for it," and my wife bought low-fat peanut butter for the next six months. SIX MONTHS! In my draft this year, I had the option of taking Big Ben or B.A. Flacco and it was seriously a no-brainer - partially because I love my wife and partially because Whole Foods peanut butter literally has NO TASTE.

Also, do NOT tell your wife that you're currently following all of your players on Twitter. Here's one from Scobee Dobee Doo!

My wife will not go with me to the horse track because she's scared that the horses will get hurt and then shot. No matter what I tell her - "the horses are great athletes!" ... "it's the sport of kings!" ... "that horsey's name is Scobee!" - she will not condone the sport. Watching the Red Zone Channel is very similar - she feels terrible for the poor host who's forced to zip from game to game in the span of seconds, sometimes even broadcasting three of four games at once (the quadruple box!). He seems to have it all together, but my wife fears that deep inside he's an emotional mess.

If you've never seen the Red Zone Channel, it looks and sounds a lot like this:

A nice-looking late thirty-something man in a tailored suit sits at a sports desk. He has a conservative, yet stylish haircut and a slew of papers in front of him. We join him midway through the second quarter, at approximately 1:53pm EST ...

HOST: Okay, looks like Beanie's knee did not hit the ground, so the fumble stands, Cowboys take over in Cards' territory. Let's take you back now to Jacksonville where Scobee is lining up an attempt at a 37 yarder. Scobes has missed all three of his attempts today, hope you don't have him on your fantasy team, and while Scobee Dobey lines up, let's go double box because the Browns have a fourth and goal from the Bengals 2 yard line. You gotta think they'll go to Hillis, he's an absolute bulldozer, but wait, looks like the Browns have an empty backfield, Hillis on the sidelines and yep, McCoy with the sneak, and he's in. Meanwhile, Scobee shanks his attempt wayyyyyy wide, gotta be something wrong with his hammy. Let's go triple box now, it seems as if Michael Vick just broke a guy's face with a football, back to Giants Stadium where we're receiving word that yes, Hakeem Nicks is out for the season with a torn ACL, and over to Tampa where Big Ben just threw his 4th TD pass of the half, this one to Hines Ward, who is dancing in the endzone, is that a Pasadoble? Yes, yes that is. Thought for a sec that might of been a merengue, but that's a doble. That's definitely a doble.


Amazingly, the host broadcasts for seven straight hours with no commercial breaks. It's a football fan's dream, but can turn into a nightmare when your wife starts yelling to change the channel because she's dizzy from the quadruple box. If your wife starts to go berserk (THIS IS VERY POSSIBLE), simply change the channel to the CBS or Fox broadcast and then turn it back during a commercial. Or you could slip some Ativan into her Special K (THIS IS ALSO A VERY VERY GOOD MOVE).

Some other quick tips because quite frankly, this is getting a little ridiculous:

- Instead of watching the pregame show where everybody laughs like lunatics, watch European football. Women love all things European. NOTE: My wife hates soccer almost as much as she hates Ben Roethlisberger ... but she LOVES Special K.

- Buy lots of sweatpants. This will undoubtedly have a negative effect on your sex life, but will keep you VERY comfortable should you spend the month of November in the doghouse.


That pie-chart up above literally took me like, two hours to make. I consider it to be the #1 thing I've ever done on this blog-blog. Not impressed? Check out this dog playing piano then. And singing.