With apologies to a certain German Führer and various members of the Counting Crows, I think it's safe to say that Jaqueline's daughter Ashley is the worst person to ever walk this planet. But who is to blame? Was it poor parenting by Jaqueline? Or was Ashley destined to suck from the start? Either way, it is clear that Jaqueline made numerous attempts to stop her daughter from sucking - but ultimately failed.
Let's take a look today at Jacqueline and Ashley's pictorial history and see if we can find any glimpses of when it all went wrong duck dong. 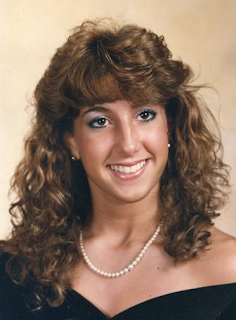 Aw, look at 18 year-old Jacqueline here - full of promise and hope. Unfortunately, just two years after this photo is taken, her life will change forever. I'm referring of course to J.R. being shot on Dallas, causing her to change her image to this: 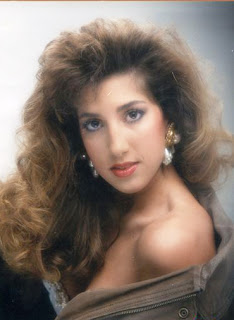 Now That's What I Call A Left Shoulder vol. 16! Wow, look at that thing. Very impressive Jaqueline, very impressive. However, if you look closer at this picture, you can see fear behind young Jaqui's eyes. That's because just three days earlier she found out she was pregnant with a demon child. 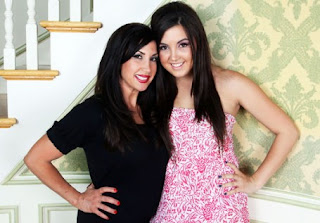 Jaqueline really did her best to nurture Ashley, teaching her essential lady-moves like the ole 45 degree angle hand-on-the-hip. She also tried to distract people's attention away from her evil daughter by plastering her house with ridiculous wallpaper. See, you hardly even noticed that the demon child is trying to headbutt her mother, Rick Mahorn-style. 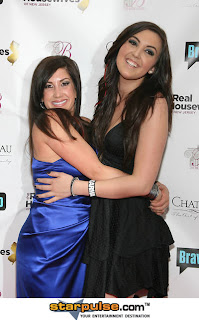 In this shot it's obvious that Jaqueline is attempting to crush her daughter's ovaries so that Ashley can never reproduce and thus put an end to the demon life-lines. But Ashley and her dumb Karma bracelet are just too strong to be stopped. You can also see that Ashley is starting to pull away from her mother - leaning back, hands slipping away - although she could just be feeling around her mother's bra for a loose twenty. 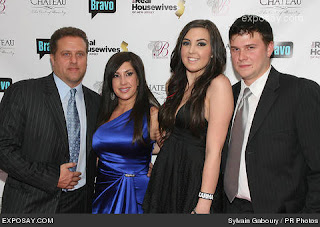 Ashley has now freed herself from her mother's grasp and has gravitated towards some dude who has absolutely no idea where he is. I'm honestly shocked that he knows how to use a razor. Ashley's stepfather is clearly worried, or possibly just ate a Burger King chicken sandwich. Jacqueline is doing a wonderful job upstaging them with her torpedo-titties. 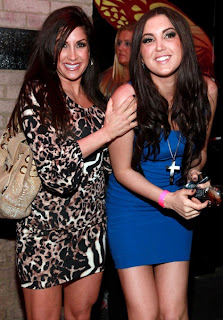 Jaqueline's last ditch attempt to wrangle in her daughter is thwarted by Ashley's refusal to have her mother carry her cellphone and granola bar. A shocking decision considering her mother is carrying an ENORMOUS pocket book. 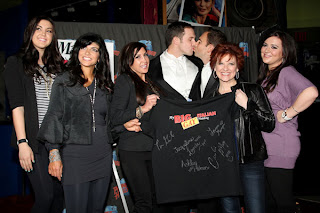 Ashley then started to gravitate towards another evil personality - the Dreaded Giudice - who taught her how to look in the total opposite direction than the cameras were facing. Also, check out Caroline Manzo who is completely oblivious to the fact that her two sons are making out hard core behind her. 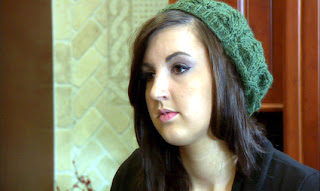 Ashley ponders her next move while wearing the world's dumbest hat. 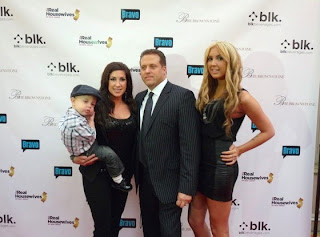 A brilliant display of teenage rebellion by Ashley! (who has now PERFECTED the 45 degree angled hand-on-the-hip.) She dyes her hair blonde and attempts to knee her stepdad in the hammy. She is completely and totally uncontrollable. 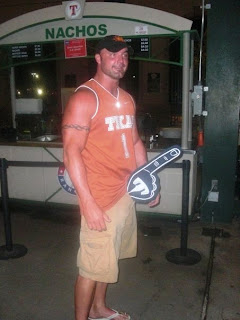 
So I lost four Twitter followers this week - can you PLEASE get some of your idiot friends to start following TVMWW? Or, you could always just check out this picture of an Israeli girl at the beach.