NBA Preview - For Dudes and Chicks

This is very upsetting because I envisioned being able to write about guy stuff too! like sports and cheeseburgers and hot chicks who I could never possibly have sex with. And so, I'm still going to write about those things; but I'll just have to tweak the content to make my posts more gender friendly.

So with dudes across the country reintroducing their women to TNT this Tuesday night, I thought I'd write an NBA preview targeted to both sexes. We'll break it down by looking at some of the most intriguing story-lines and putting them in big, bold letters.

So here it is:

The Evster's NBA Preview For Both Dudes and Chicks

I realize this is very sexist approach to writing a post. There are plenty of chicks who watch basketball and plenty of dudes who shave their asses and watch Nurse Jackie. This could easily be called The Evster's NBA Preview For Both Sports Fans and Non Sports Fans, but that just sounds dumb (and I'm a bit of a chauvinist).

Honey, I'd like to introduce you to two young men; this fella here is John. And this guy here, with the red hair, this is Blake.

For dudes: I couldn't be more excited for the arrival of John Wall and Blake Griffin, especially considering we've had to wait an extra year to see Griffin. He's a complete freak of nature and could potentially be a 20-10 guy in his rookie year. Down in Chocolate City, Wall is being compared to Rajon Rondo, but he's much more explosive and well-rounded offensively. Wall's jumper is half-decent, whereas Rondo shoots like my Aunt Maxine. Also, Wall's height and leaping ability make him a much more outstanding finisher. He's more of a combo guard and we all know that Combos are much better than regular snacks.

For chicks: You know when you go to a game and the giant furry mascot comes out and jumps on the trampoline and does a flip and then dunks the ball? Well, there's two guys that are new to the league this year that have the potential of flip-dunking without a trampoline. Yeah, and one of them happens to be one of those weird, light-skinned red-headed black dudes. I know, so exciting!

Yeah, he's on the Heat this year. And so's that guy who looks like a dinosaur!

For dudes: I don't understand why some writers are uncertain about the Heat; Who will take the last shot? Will they play defense? Is Chris Bosh actually a dinosaur? I have ZERO concerns about Miami; they will be unstoppable and I can't wait to see them. Folks, THEY HAVE LEBRON, D-WADE AND BOSH! You could stick my Aunt Maxine and Uncle Ivan in their starting five and they'd still win 63 games (geez, I sure am being hard on my Aunt Max's hoops game today). Not to mention, Pat Riley has surrounded them with decent enough role players, Mike Miller, Udonis Haslem and Mario Chalmers. Provided they stay healthy, the Heat will be in the Finals.

For chicks: Okay, you know how ABC put together that show The View? And they tried to assemble the most annoying women of all time to collaborate on one, unwatchable, train-wreck of a talk-show? Well, imagine if the producers put together a good panel; no, an AMAZING panel with Ellen Degeneres, Sandra Bullock, Wanda Sykes, Marie Antoinette, Cleopatra and Tinkerbell. Well that's what the Miami Heat are this year: LOADED. Oh, and Dwyane Wade recently left his high school sweetheart and their two kids for Gabrielle Union ... I know!

The Little Men are taking over.

For dudes: Think about how many good point guards there are these days! Top tier guys like: Deron Williams, CP3, Rondo, Derrick Rose ... OG's: J-Kidd, Steve Nash and Chauncey ... Young Bucks: Steph Curry, Russell Westbrook, Tyreke Evans, Brandon Jennings, John Wall ... Dudes that are good that you don't even think of when you think about good PGs: Tony Parker, Jameer Nelson, Aaron Brooks, Devin Harris, Baron Davis ... guys that are 47 years old that could still drain a jumper in your eye: Derek Fisher. There hasn't been a league dominated this much by point guards since the 1987 season at the JCC in Wynnewood, PA featuring Jason Eisenstadt, Josh Levin and Ari Goldfarb.

People need to chill out with all this Kevin Durant hype.

For dudes: Look, the Durantula is fantastic and Oklahoma City has surrounded him with some nice, young talent, but people need to calm the freeps'd down. He may be on the cusp of superstardom and could probably dunk a ball with his mouth, but there are three players that are far and away the league's best: Kobe, LeBronski and D-Wade. You could make the argument for any one of them, but KD still has a ways to go to reach their level. In my opinion, LeBron is the most talented, D-Wade the most electric, but in the NBA playoffs, when the money is on the line, I"ll take KB. He's a killer.


For chicks: There's this guy who plays for the Oklahoma City Thunder (yeah, that's a team) who looks like a giant string bean. He's really good, but not as good as the media is making him out to be. Kinda like foie gras.

For dudes: With the addition of Matt Barnes to play alongside Ron Artest, the Lakers now have two of the craziest dudes on the planet. And they're both very different kinds of crazy. Ron Artest is straight loopy crazy, like I wouldn't be surprised to read on The Superficial that he was found hot tubbing with Zsa Zsa Gabor and Wink Martindale in the Hollywood Hills. While Matt Barnes on the other hand is "hide your children" crazy 'cause if you look at him the wrong way, he will choke you. Then again, Ron Artest has also been known to choke people out, so that's a double dipper. I'll give the slight edge to Ron Ron just because HE ONCE RAN INTO THE STANDS AND STARTING PUNCHING SOME DUDE WHO HE THOUGHT THREW A SODA AT HIM!! But I wouldn't be shocked to hear that Matt Barnes burnt down someone's house, either.

For chicks: If Danielle Staub played basketball, she would play for the Los Angeles Lakers. And so would her sidekick, Lisa Left Eye Lopes. Put them together and you'll understand why your husbands and boyfriends won't be going to bed early on Thursday nights. Also, for the record, I think Barbara Walters is crazier than both of those other two nutjubs combined ... yeah, I said it.


Let's rank the craziest guys in the NBA:

1. Ron Artest - the Malice at the Palace, "Queensbridge in the building," partying all night in his uniform after the Lakers won the title ... indisputable numero uno.
2. Matt Barnes - after being arrested last month for domestic violence, Barnes tweeted his innocence and  disputed the charges, "Don't let your ears witness what your eyes didn't see!!!" ... Well Matt, my eyes can see that you're insane ... please don't kill me.
3. Kenyon Martin - tourettes-like tick combined with neck tattoo of shiny, red lips ... cuckoo! cuckoo! ... also recently broke up with rap-star girlfriend Trina who has a very dirty mouth.
4. The Birdman - whatever, just gonna get this giant "FREEBIRD" tattoo on my neck, not that big of a deal. 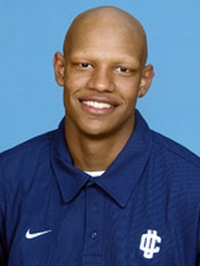 I get to see my friends again!


For dudes: Whenever my wife sees that TNT's halftime show is on, she calls me into the room and says, "Honey, your friends are on!" and I come running in to see Ernie, Kenny and Sir Charles. It's really been too long since I've seen my old pals (not to mention C-Webb, Jalen Rose, Mark Jackson and Jeff Van Gundy). This year, ESPN has added Chris Mullin and his Brooklyn accent into the mix as a studio analyst and I couldn't be more excited. You haven't lived until you've heard him say, "point gahwd."

For chicks: Look, the bottom line is that the coolest athletes are basketball players because the coolest people are black people. This is undeniable. And so, whereas baseball has lame-o white dudes analyzing their sport and Top Chef has Gail Simmons, the NBA has charismatic, hilarious, cool brothers analyzing theirs. If nothing else, we can all get behind the NBA for this reason. Plus, black people have way better fashion sense and wear amazing custom-made suits. Like this one, and that one, and this one, and that one.

Enjoy the season. I couldn't be more excited to welcome black people back into my life.